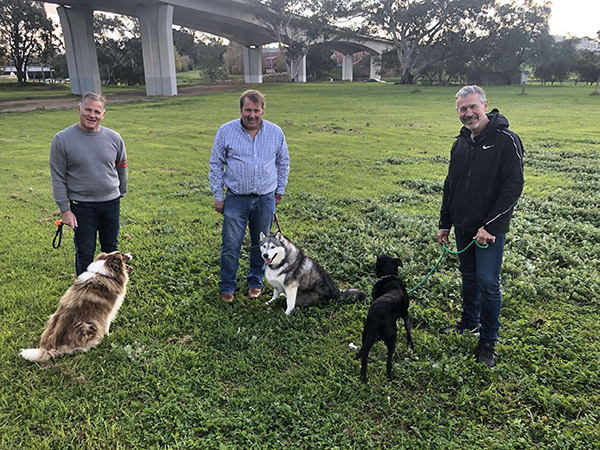 The City of Greater Geelong has released plans to create two new fenced dog parks located in Belmont and Lara, that will offer purpose-built spaces for dog owners to exercise their pets off-leash in a controlled manner.

Features of the dog parks include:

The Belmont park is proposed to be built in the large open space reserve under the Settlement Road Bridge on Barrabool Road.

The dog park in Lara is set to be developed in Hovells Creek Reserve along Rennie Street.

The sites are among three fenced dog parks that the Council has committed to building over the next year.

A proposed location on the Bellarine Peninsula is still to be determined.

There is strong community support for new dog parks, which would complement the City’s existing facility in Corio.

A survey by the City of 617 dog owners found 84% were in favour of the development of extra dog parks.

Ron Nelson, Chair of Sport and Recreation advised “these dog parks respond to community calls for more places to exercise dogs in a safe and friendly environment.  As a dog owner, I know the value of allowing dogs the freedom to run off-leash in a secure space.

“It encourages them to not only exercise but also to mix and explore the area with other dogs. Dog parks are also a great place for owners to socialise and meet like-minded people, fostering deeper ties in the community.

Image: City of Greater Geelong  Councillors Peter Murrihy, Ron Nelson and Bruce Harwood with their dogs at the proposed site of a new dog park in Belmont.