Former Geelong boatyard to be transformed into new beachside park 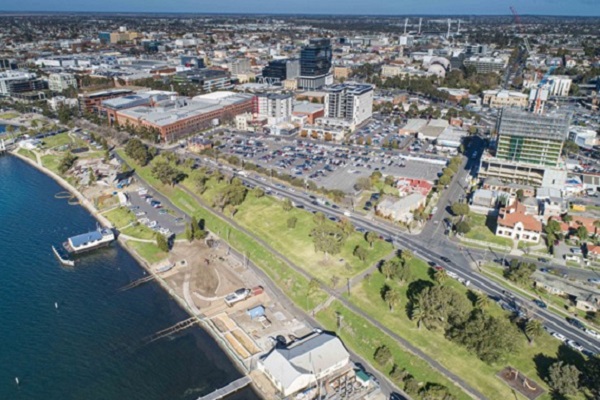 A disused site on Geelong’s waterfront is to be revitalised as a public park that celebrates the area’s history.

Work on the former Western Beach boat yard will be largely completed next month, with the site to open once final landscaping touches are applied.

The prominent 3000 metre² site has been fenced off since boat builder Lew Marine ended its operations in 2005.

The open space was restored through extensive construction and management methods by an experienced contractor.

It draws on the area’s extensive industrial past, showcasing the remaining infrastructure and some historic original boats from the area.

This includes a 103-year-old double-ended fishing boat, which is positioned on the old slipway to show how it would have been launched.

Interpretive signage will provide further information about the history of the area, including the addition of sea baths in the 1840s.

The City’s Smart Cities team, in conjunction with Deakin University’s MInD Lab, is also looking at using augmented and virtual reality technology to bring the story of the site to life.

Commenting on the new area of open space, City of Geelong acting Mayor Councillor Peter Murrihy stated "the park will provide another unique attraction on the waterfront and add valuable space for recreational and social activities.

"It will also give visitors a better understanding of Western Beach, by paying tribute to the area’s significant maritime history.”

30th May 2018 - Geelong Council plans to phase out soft drinks at aquatic, recreation and sport centres