Floods show the worth of Dalby Aquatic Centre’s elevation 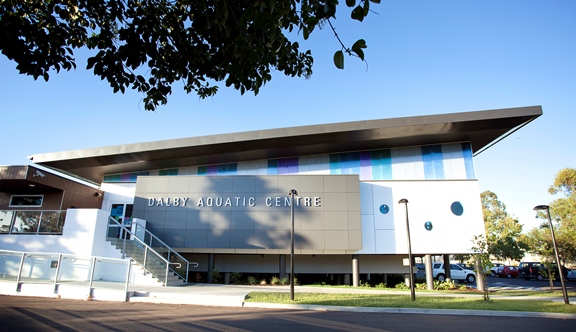 Recent floods in Queensland's Western Downs Region have proved the value of elevating the redeveloped Dalby Aquatic Centre above the town's flood plain.

Officially re-opened in October last year, the new 25 metre pool within the $4.62 million facility was developed 3.2 metres above natural ground level to ensure the entire facility remains above 'Q100' flood levels. With the value of the decision to elevate the new pool indicated during the Queensland floods of January 2011, during the early stages of the facility's development, the new Dalby Aquatic Centre was put to the test in March this year, when floodwaters reached a level just below the pool deck.

Expansion of the Dalby Aquatic Centre represents the first major development of the community's aquatic facilities since the centre first opened in 1936.

The new indoor heated 25 metre pool and support facilities were developed adjacent to the oldest 50 metre Olympic pool in Queensland built outside of Brisbane – a pool listed on the Queensland Heritage Register.

The project maintained one specific goal – to create an indoor heated pool offering flexibility in programming, environmental performance and equitable access for the community. The project provides residents an opportunity to get involved in a range of year round aquatic activities, including learn-to-swim, seniors fitness, aqua aerobics, sport fitness training, injury rehabilitation and regional swimming carnivals.

The indoor pool has been developed between the existing 50 metre pool; Myall Creek to the north-west and Dalby's ANZAC Park and the War Memorial Gates in to the East. A secondary entry configured perpendicular to the Memorial axis increases legibility around the site, and connects Myall Creek Parkland to the entry.

The north and west walls of the new facility create an interface between the natural parkland adjacent Myall Creek, the indoor 25 metre pool and the existing 50 metre pool. The walls were divided into two zones. The base band with random porthole windows activates the centre, captures the view, provides greater privacy for swimmers at concourse level and controls harsh summer sun. The higher band allows natural ventilation through louvers and colourful top-lighting through a dual layer of polycarbonate, while increasing the sense of space internally by floating the roof.

In operation, backwash water is reduced by over 90%, creating energy and chemical savings of up to 30%, and plant operations essentially produce zero waste when compared to typical sand filtration systems. The plant footprint is also reduced by 75% which directly reduces the building envelope requirements.

Action Aquatics are a partner company of Ozcrete, who constructed the swimming pool shell and installed the pool tilling.

The facility also collects rainwater that is stored underground, then utilised for topping up pools and irrigation while its internal environment is controlled via heat recovery mechanical system and delivered through fabric ducts.

Financial modelling was completed for all air and water heating systems and selected upon efficiency, life cycle cost, context, maintainability, and ease of operations.

Servicing a catchment area of around 15,000 people, the new facility began operating in August 2012 and has attracted high levels of usage.

Patronage of the facility rose by 75% for the final three months of 2012, represented as 82% of the historical annual usage in a single quarter.

Western Downs Community Services, Sport and Recreation Councillor Charlene Hall has been an enthusiastic proponent of the development and has welcomed the use of the facility by the local community.

As an example, Councillor Hall cites "the senior citizen who told me of her excitement at buying her first ever swimming costume at 82 and who now swims every day!"

In respect of the new facility's flood resistance, Councillor Hall adds that the facility "has been brilliant in overcoming the challenges of flood waters and its elevation has even aided the wider distribution of flood water."

The Centre was designed by Brisbane-based architects and principal consultants Liquid Blu and its innovative design has been recognised with regional commendation in the Public Architecture Category at the Australian Institute of Architects 2013 Darling Downs Architectural Awards.

Liquid Blu's Dalby Aquatic Centre entry will now progress to the coveted Queensland Architecture Awards to be announced in Brisbane on 21st June.

For more information go to www.liquidblu.com.au/aquaticandrecreation/dalby-aquatic-centre-project-0005.html