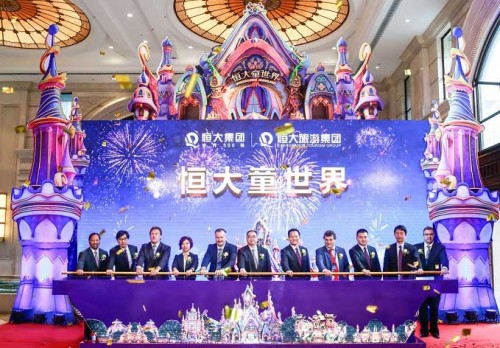 The property development group plans to develop the indoor attractions across ‘second-tier’ cities (cities of three to 15 million people) including Changsha in central China, Guizhou in south western China, and two cities in eastern Zhejiang province, a drive of a few hours from Shanghai.

Expanding on plans announced earlier this year, the parks are expected to rival Shanghai Disneyland, with the company stating their attractions will be 50% larger than their rival.

To be built at a coast of US$7 billion per park, each attraction will feature 33 large-scale rides themed around characters from Chinese and Western mythologies.

Each of the indoor parks will aim to attract more than 15 million visitors and generate around US$3 billion in revenue from tourism-related services annually, the company said in a statement (link in Chinese).

According to Chinese media reports, Evergrande’s Children’s World will feature Chinese mythological characters as inspiration for rides including Chang’e, the goddess of the moon, and Pan Gu, a giant who created the universe.

Meanwhile, parts of the theme parks will be devoted to Western figures including Greek god of the sea Poseidon, Cinderella, and Alice in Wonderland – while Alice and Cinderella have been Disney, the age and origin of the stories mean Disney does not hold copyright on the characters.

Construction of the parks will be completed between 2019 and 2022 with Ideattack, ITEC, Sanderson, Vekoma, Zamperla and HUSS named as suppliers.