Environment to blame for obesity 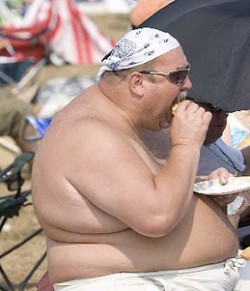 An Australian academic who has measured the rising calorie load of the American diet says the developed world faces a "monumental" task to turn around poor eating patterns.

Professor Boyd Swinburn, working alongside American researchers, set out to gauge the differing roles played by diet and exercise as America's collective waistline expanded over the past 30 years.

Professor Swinburn found diet alone could explain the 8.6kg increase in the weight of the average American adult since the late 1970s, and he says this would be difficult to turn around given the massive shift that has also occurred in the "food environment".

"If you think of how the food environment has changed over the last 30 years it has been quite remarkable," Prof Boyd, who is director of Deakin University's World Health Organisation Collaborating Centre for Obesity Prevention, told AAP.

"And with food in general, prices has come down over time ... particularly for the highly processed, energy-dense, high in fat and sugar foods."

Professor Boyd Swinburn's research, which he said would produce similar results if focused on Australia, found an American adult would have to cut about 500 calories from their daily food intake to return to the average weight seen in the 1970s.

This was the equivalent of one large hamburger daily.

The average American adult now weighs in at 80.8kg, while the average US child had gained 4kg over the 30 years to now weigh 43.1kg.

This child would need to cut 350 calories - one can of soft drink and a small portion of chips - daily to lose the weight.

Prof Swinburn said while activity levels were found to play only a minimal role in the weight gain over the years, his study should not be seen as being critical of exercise, which was a key way to improve health.

The study did, however, point to the importance of diet in a time when "all of the drivers have been towards increasing the energy density of our food supply," according to Professor Swinburn.

"The challenge ahead of us is large - monumental if you want to get people to reduce that amount of intake - and it is going against all of the forces out there at the moment.

"We definitely should not underestimate the task ahead of us."
AAP