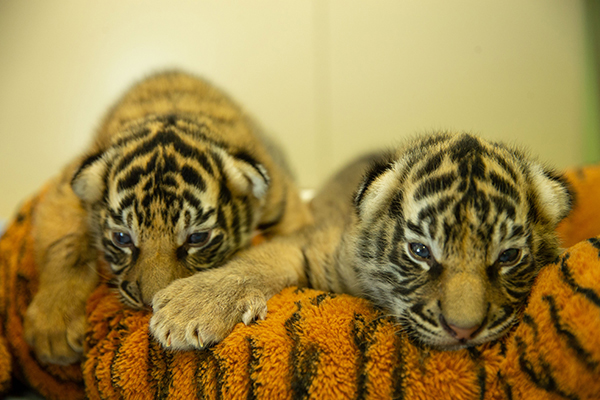 Dreamworld’s two brother tiger cubs have made their first public appearance at the Tiger Island Nursery. Dreamworld Wildlife Foundation is one of the world’s largest financial contributors to wild tiger conservation and helps support the international breeding program to ensure the long-term future for these magnificent animals.

Now just over two weeks old, they are weighing 3.58 kilograms and 3.14 kilograms respectively; more than double their weight since their birth on Friday 26th April 2019.

Explaining that Dreamworld guests can meet the two cubs and watch as they grow through the nursery’s viewing windows, Dreamworld General Manager Life Sciences, Al Mucci stated "since the initial announcement, guests have been anxiously waiting to meet the first litter born to Tiger Island residents Adira and Pi.

“Dreamworld guests will now be able to watch as our two boys come into their own. They have just started opening their eyes and exploring their surroundings, so will become more alert in coming months.”

The cubs will remain in the quarantined nursery area until they receive their vaccinations in the next few weeks, as part of Dreamworld’s comprehensive care plan.

These vaccinations are necessary to protect the cubs from feline diseases and make sure the young cubs are the healthiest they can be before venturing out into their new world at Dreamworld.

Mucci added “once the cubs have been vaccinated, they will also be able to step out onto Tiger Island and interact with the other members of their tiger family.

“Like their Tiger Island family, the two brother cubs will be fantastic ambassadors for their endangered cousins in the wild.”