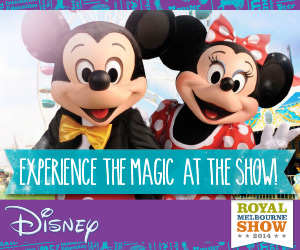 While carnival ride operators have been focussing on safety issues, the presence of Walt Disney characters Mouse and Minnie Mouse has helped draw in the crowds at the 2014 Royal Melbourne Show.

Part of an exclusive partnership between the Royal Agricultural Society of Victoria (RASV) and The Walt Disney Company, the famous characters have, for the first time in Australia, presented the Disney Rockin’ the House with Mickey Mouse at the Show’s Entertainment Dome.

The partnership also offers showgoers various photorgraphic opportunities to meet Mickey Mouse and Minnie Mouse and a range of other free entertainment experiences for visitors including Disney’s Frozen Karaoke Marquee, where visitors have the chance to show off their singing talents to songs from the biggest animated film of all time.

RASV Chief Executive Mark O’Sullivan said the RASV is delighted that Disney is involved with the 2014 Show, stating “the RASV is committed to the Royal Melbourne Show being a world class event that offers extraordinary value with a range of unique experiences, thrilling attractions and quality entertainment.

“The involvement of Disney greatly enhances the value of the Show experience.”

The 12-day Show, which runs until Wednesday (1st October) has offered a bonanza of rides, showbags, animal events and classic show food.

Conducted annually by the RASV to promote and celebrate Victorian agriculture, the

Other stars of the Show are the thousands of animals and their handlers, along with other talented exhibitors competing to win Best in Show and claim a coveted Royal Melbourne blue ribbon.

For more information about the 2014 Royal Melbourne Show go to www.royalshow.com.au