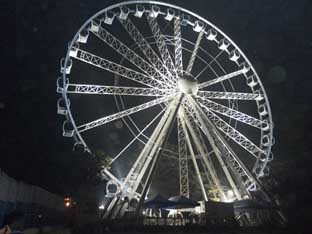 The Delhi Eye, a 65 metre ferris wheel located next to the Kalindi Kunj gardens in the Indian capital of Delhi, has been opened to the public.

Part of a wave of giant observations being built in major cities across Asia, opening of the Delhi Eye had been delayed by four years after an Indian Court-appointed committee deemed the development ‘illegal’ as a result of its encroachment on the River Yamuna. The Court delayed the opening because of the attraction falling within a 300-metre strip along either side of the river where private and commercial construction had been forbidden.

However, Syed Salim, Managing Director of iZara Entertainment, which runs the wheel told local media that “all … clearances have been obtained now, and from now, it’s up and running all seven days of the week.

Salim added “we hope the strategic location of amusement park at Kalindi Kunj will make it accessible to people from Delhi, Ghaziabad, Faridabad and Gurgaon and the tourists will have another spot to visit in Delhi.”

For more information go to www.delhieye.net