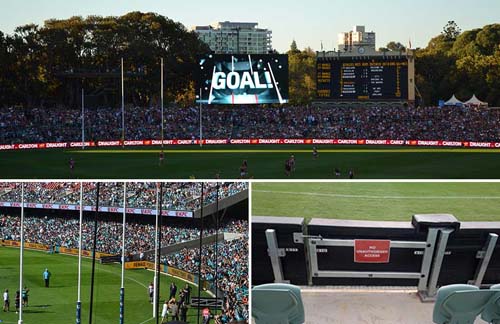 Daktronics has recently completed the installation of its first ‘super-system’ in Australia at the new Adelaide Oval.

Commenting on the installation, Adelaide Oval Stadium Management Authority General Manager Commercial Darren Chandler explained that "the feedback from Adelaide Oval patrons about the clarity and size of the replay screens has been outstanding – it's certainly the response we were hoping for given the quality of the system we have invested in.

"The dual level ribbon displays are also working well and we've generally been very impressed. From a technology perspective, the system has certainly enhanced our capabilities as a world-class stadium."

The main display located on the north mound measures 9.88 meters high by 18.65 meters wide and features a 15HD pixel layout. This display provides excellent image clarity and contrast while showing live and recorded video. It can also be divided into separate windows to show multiple graphics, animations, statistics, game information and sponsor advertisements. It incorporates wide angle visibility to appeal to every seat in the stadium while also providing multiple levels of protection from the outdoor elements. ​

Six additional video displays were installed to aid in show live video, replays and other game information to viewers throughout the venue.

The other two video display displays are located in the William Magarey Room, an internal functions space, one on the east side and one on the west side. Each of these displays measures 2.22 metres high by 4.12 metres wide and each feature a tight 6 millimetre line spacing for crisp images at closer viewing distances.

Daktronics’ Australia Sales Manager Blair Robertson added "we are delighted to be involved with the first of its kind in Australia whereby the game-day environment is enhanced by integrated IPTV and LED compatibility.

"The combination of three large LED displays and two tiers of LED fascia displays within the stadium bowl provides fans with uninterrupted large vision and significantly more detail than ever before. With a further two external LED displays, internal hospitality and ticked office window displays, this is truly a super-system we are all very proud to be a part of."