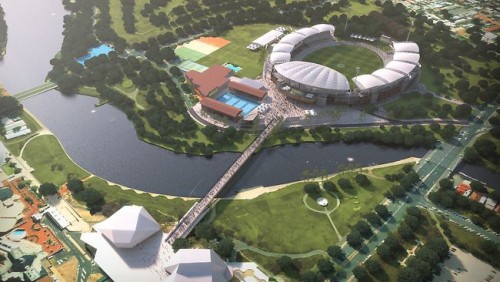 The first stage of the $535 milion Adelaide Oval redevelopment has been revealed with the new-look hill the main focus.

The iconic hill has been completely re-built and now contains 2,800 new seats with standing room bringing the capacity to around 3,500. During the 2012/13 cricket season, the venue will have a total capacity for just over 20,000 spectators.

More than 800 metres2 of timber-decked entertainment space has been built behind the historic Adelaide Oval scoreboard. The area contains new food and drink outlets and other spectator amenities.

The ground is being redeveloped to become the Adelaide's main sporting arena, with city's two AFL teams to move from AAMI Stadium at West Lakes to the inner-city venue. Once complete, it will boast a capacity of 53,500.

The southern stand is due for completion in October 2013 and will increase capacity to 35,000 in time for the return of England for the highly anticipated Ashes. The final piece of the development, the eastern stand, is expected to be completed for the 2014 AFL season in March 2014.

For more information go to www.adelaideovalredevelopment.com.au/