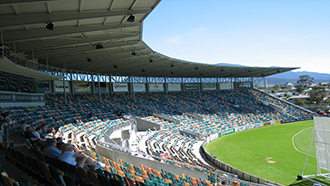 The redeveloped main stand at Hobart's Blundstone Arena (the former Bellerive Oval) will be put to the test for the first time on Tuesday 23rd December when the Hobart Hurricanes host the Sydney Sixers in the T20 Big Bash League.

Developed with aim of improving the fan experience at the venue, the new $30 million grandstand has no columns so fans will not have their views of game action impaired

Designed by Suters Architects in partnership with ARTAS Architects, the new grandstand also has a capacity of almost 20,000, which is 5,000 more than the old one.

During a preview of the venue, Stadium Operations Manager Stephen McMullen told the ABC that the new blue seats were also significant.

McMullen stated “part of the architects early brief, (was) encompassing the Derwent River behind the stand.

"It's been a big job for everyone so I am proud in what we've been able to achieve."

Cricket Tasmania Chairman Tony Harrison said the redevelopment was a big step forward, adding “now I think we have ... a world class facility here and I just hope that the fans of Hobart and Tasmania and further afield really come along.

"It will strengthen the sport here, we've done very very well over the last decade, particularly on the field, and we need to keep that momentum up when everyone else is improving at the same time."

The ground will also host ICC Cricket World Cup and one day international fixtures next year.

For more information go to www.crickettas.com.au/blundstone-arena