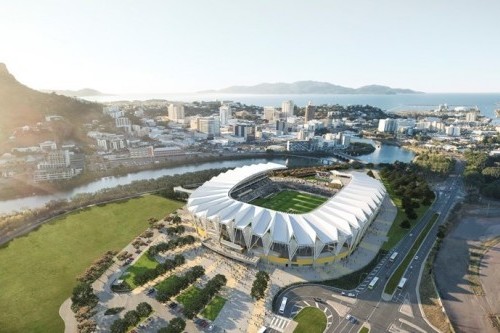 The North Queensland Stadium construction team is on track to induct its 1000th employee by the end of the year.

In a major boost for local employment, almost 99% of construction work carried out so far has been done by locals, with a high rate of Aboriginal and Torres Strait Islander participation.

Minister for Sport Mick de Brenni said building the stadium was yet another example of the Queensland Government delivering for Townsville.

“We said we would get on and build the stadium and that’s exactly what we are doing,” Minister de Brenni said.

“Our record of infrastructure delivery in the region has meant more jobs being created every day.

“We will continue to support projects, like the stadium, that provide a boost to the local economy.”

Townsville MP Scott Stewart congratulated one of the local Indigenous construction workers, Stafford Wyles, who this month will celebrate the completion of his first year working on the project with subcontractor Mendi Constructions.

“During his employment Stafford has gained Roller Operations, Haul Truck Operations and Electrical Spotter qualifications, all of which will help him on future projects as well as in his current role,” Stewart said.

“Stafford’s achievements are an example of the tangible benefits this project is bringing to the people of Townsville, including the Aboriginal and Torres Strait Islander community.”

Thuringowa MP Aaron Harper said the project was also building a skilled workforce in the region.

“The latest figures we have, show that almost 99% of the 286,171 construction hours completed so far on the project have been carried out by locals and that the Aboriginal and Torres Strait Islander construction workforce participation rate is above 16%,” Harper said.

“Since the project began there’s been more than 68,000 training hours completed by locals, of which over 45,000 hours have been completed by Aboriginal and Torres Strait Islander people.”

Wyles was one of the first workers to complete a site safety induction. These site safety inductions are compulsory for anyone working on the North Queensland Stadium construction site and involve an online training course and an onsite induction around first aid procedures, PPE requirements and traffic management.

Mendi Group Managing Director Jeff Doyle said being involved in this project is something his entire team within the Mendi Group is proud of.

“The opportunity has provided the possibility to increase our workforce along with the ability to continue to train and upskill,” Doyle said

“These are important key factors which are vital for our business, the construction industry and the Townsville community.”

There are 42 apprentices and trainees working on the project, including eight Aboriginal and Torres Strait Islander employees.

The project is expected to support about 750 full-time equivalent jobs during the design and construction stages.

“Townsville’s economy is turning the corner and the North Queensland Stadium is an important project that is bolstering local businesses and delivering hundreds of jobs for locals,” Mayor Hill said.

“Importantly, major projects – such as the Stadium and water pipeline – are providing opportunities to the city’s next generation of workers to train and upskill for the future.

“The whole city is watching the stadium rise from the ground and the benefits are only starting to be felt throughout our community.”

“With 40 out of the 49 trade packages awarded to local businesses, our commitment to have North Queenslanders build the stadium is being realised,” said Minister de Brenni.