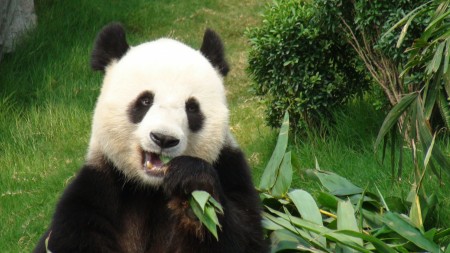 The Chengdu Panda Base in China's Sichuan province is to offer contestants from around the world a chance to help look after the endangered animals for a month.

Officials at the base are planning to give animal lovers from around the world the opportunity to sample the panda keepers job by launching a global search for six panda keepers as part of an awareness campaign on the plight of the animals.

Organisers say that from August, they will be looking for "bright, articulate and engaging individuals from China and around the world, who care deeply about conservation issues" to spend one month in Chengdu.

The winners will "learn how unique these animals truly are, assist researchers and scientists there, and help raise awareness by blogging to millions of people around the world about their experience," organisers note.

Full details of the competition and how to enter will be released soon.

Huang Xiangming, head of the animal management department at the base, says that when it first opened in 1987, the centre only had six pandas, rescued starving from the wild. It now counts 84 permanent residents.

Haung says panda keepers are especially needed at times of mating in spring and birthing, which starts during the summer. These rituals are vital, as the animals' notoriously low libido has frustrated efforts to boost their numbers.

Huang explains "we barely rest during these two important times. Our workers just throw themselves into looking after the pandas.

"They make such great efforts - some even postpone their weddings."

Nearly 300 pandas have been bred in captivity in various centres in China, and researchers are now looking at ways to send captive-bred pandas into the wild to boost the number of animals roaming free.

The difficult task got off to an inauspicious start when Xiang Xiang, a male cub, was trained to adapt to the wild and released into nature in 2006. He was found dead 10 months later, apparently killed by wild pandas.

China has started construction on a centre that will help captive pandas adapt to the wild, and researchers also plan to send pregnant pandas into the semi-wilderness in an effort to introduce their cubs to a natural environment.

"We spent the last 50 years saving the giant panda. We are going to spend the next 50 years helping them re-adapt to living in the wild," said the base's Director-General, Zhang Zhihe.

The six lucky amateur panda keepers might get to interact with some of the stars of the base, such as Mei Lan, the three-year-old who was born in Atlanta in the United States and returned to China earlier this year.

Under agreements between China and the USA, any offspring of pandas on loan to the United States must be returned to China within two to three years of their birth.

Chen Min, Mei Lan's keeper, was tasked with calming down the recent arrival, who took some time to adapt to her new Chinese environment, and she says the female panda still has a temper.

"Sometimes, if she doesn't do her exercise well, we won't give her an apple and she gets very angry. She'll just ignore you and go to sleep," she says with a smile.