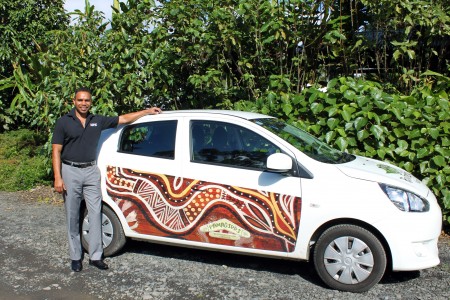 William Enoch-Tranby has been employed by CaPTA since 1995, originally as a guide at the Pamagirri Aboriginal Experience at Rainforestation Nature Park.

He is now employed as a Sales Executive for CaPTA, after completing his Certificate III in Tourism Sales and Marketing Operations, and still maintains his strong involvement with Pamagirri.

Enoch-Tranby said he was very appreciative of the opportunity to become a member of the Employee Network, along with the other inductees, stating “it is a great way to support indigenous employment in the region, and I’m very grateful to CaPTA for being so supportive of the initiative as well.”

CaPTA is well-known throughout the Far North Queensland for its support and encouragement of indigenous employment, having been members of the QTIC Indigenous Employer Champions Network since 2009.

Enoch-Tranby added “As part of their involvement with QTIC, CaPTA, under Charles and Pip Woodward, has created initiatives and strategies for indigenous employees to help develop high work standards and attendance, as well as the opportunity to gain further qualifications.

“They have also provided me with enormous support, encouragement and guidance during my employment with the company.”

The QTIC North Queensland chapter is the first to develop an Employee Network, part of a $300,000 partnership with the Echo Entertainment Group, with seven other indigenous employees also inducted.

Launched earlier this month, the Queensland Tourism Industry Council (QTIC) Indigenous Employee Network is designed to strengthen the representation of existing and potential Indigenous employees in the tourism sector across Queensland.