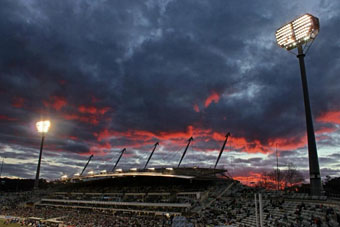 The ACT Government has allocated $440,000 in its latest budget for "physical security" upgrades at GIO Stadium Canberra that will see the addition of CCTV cameras, stronger entrance gates and the deployment of portable vehicle-protection barriers.

Following a 2018 review that identified "opportunities to further strengthen security arrangements", the new installations at the 25,000-seat venue will add to venue’s 75 cameras that are connected to dedicated CCTV control centre behind ACT Police’s newly refurbished operations room at the Winchester Police Centre in Belconnen.

This spending will come on top of $975,000 put toward CCTV enhancements over four years in the 2018/19 budget, both at the Stadium and at other unspecified locations around Canberra.

As reported by The Canberra Times, a new security master plan is understood to be under development for Canberra's largest sports venue, with the protection of crowded places and places of mass gathering under intense focus following the March terrorist attacks in New Zealand on two Christchurch mosques and incidents at venues in Europe.

In 2017, the Australia-New Zealand Counter-Terrorism Committee released its national strategy document for protecting crowded places from terrorism, defining them as "locations which are easily accessible by large numbers of people on a predictable basis".

The strategy places responsibility on business and government to deliver safe environments, with the Committee pointing out that "reputation is prone to serious and permanent damage if owners and operators of crowded places give a less-than-robust responsible, professional priority to protecting people against attack".

A self-assessment tool for business owners and managers of major events is posted on the ACT Police website.