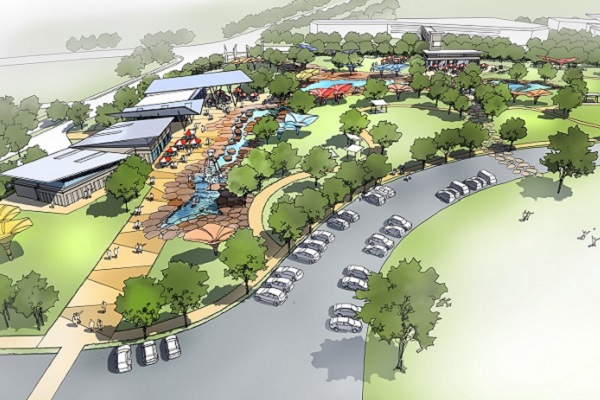 Campbelltown City Council’s planned $18.75 million Billabong Parklands development is moving forward with a search currently underway for a landscape architectural design consultancy to fulfil a ‘lead’ role with responsibility for all design co-ordination and outputs for the project.

Funding was announced this morning for the $18.75 million state-of-the-art water recreation space,

Set on a 4 hectare site on the corner in the suburb of Bradbury, plans for the billabong include a range of recreational water play facilities, including a stream, swimming lagoon and a zero-depth play area.

The concept design includes a series of rock pools along a meandering waterway that leads to the 1700 metre² swimming lagoon that will be up to 1.5 metres deep.

Campbelltown Mayor George Brticevic has described the billabong as “a groundbreaking project that will launch the city’s transformation into a significant metropolitan destination.

“The concept design of the billabong has been inspired by our unique natural environment including the rock pools, waterfalls and rapids of the Dharawal National Park that will be set in our city centre for everyone to enjoy.

“It will create a new water attraction in western Sydney and reduce the effects of urban heat as well as bring job opportunities and increased trade to nearby businesses.”

Funding for the project has been made possible by a $15 million commitment funding under the NSW Government’s Western Parkland City Liveability Program with the Council to fund the remaining $3.75 million.

It is expected that the project will be constructed and ready to open in 2021.

Click here for more information on the tender for Landscape Architectural Design Consultancy Services for the Campbelltown Billabong Parklands on the Australasian Leisure Management Tenders page.