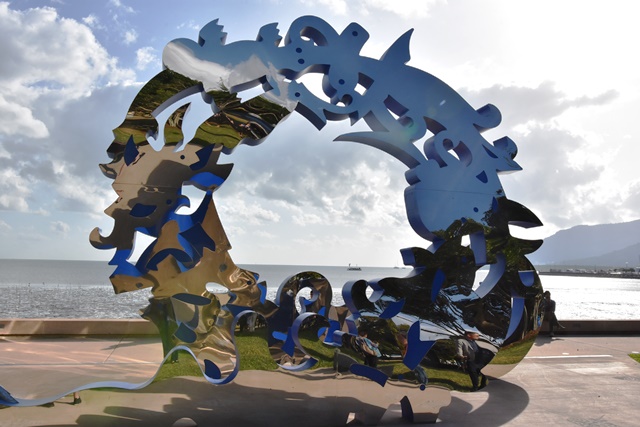 Cairns Council has invested over $3 million in public art from 2012 to 2018, with 135 new artworks commissioned or acquired for public space.

The outcomes of the Review aligned to the core principles and objectives of Council’s Public Art Policy, including the position of Cairns as the arts and cultural capital of Northern Australia.

One such public artwork unveiled on the Cairns Esplanade in 2017 is the Citizens Gateway to the Great Barrier Reef conveying a social movement to engage the world in the future of the World Heritage area.

Nationally recognised Torres Strait Islander artist Brian Robinson was commissioned to create the artwork that anchors Cairns as the primary entry point for visitors to the Reef.  His 6 metre-high and 11 metre-wide helix depicts a wave of marine creatures and birds led by a life-size stingray to reflect the biodiversity of the Great Barrier Reef.

Framing the view to the Reef from the Cairns Esplanade, the Citizens Gateway inspires those who walk beneath it and see their reflection in its mirror-polish stainless steel to think about their connection to the Great Barrier Reef.