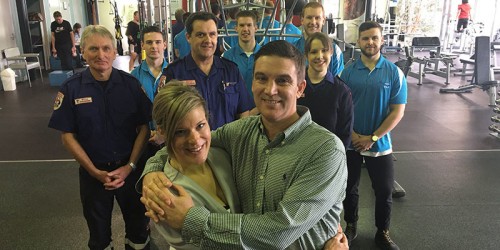 A Ballarat father-of-five who suffered a cardiac arrest at a Ballarat fitness centre was recently reunited with two Mobile Intensive Care Ambulance Paramedics (MICA) and an Advanced Life Support (ALS) paramedic who came to his aid.

47 year old Jeremy Larkins was doing a workout at the Ballarat Aquatic and Lifestyle Centre (BALC) when he became unwell in June.

Larkins explained “I’m usually at the gym five-to-six times a week, and aside from feeling a little off earlier in the day, I still felt well enough to head to the gym.”

Larkins was training on a piece of equipment when he collapsed.

First on the scene was BALC personal trainer Jakob McDowell, an employee who was on his third shift at the centre.

McDowell saw Larkins collapse and immediately went to his side and tried to rouse him.

Stewart explains “Chris decided it was time for CPR, he started and I jumped in and started compressions while Chris started the defibrillation.

“We continued the compressions for seven minutes until paramedics arrived.”

Stewart said he had never done CPR before, but didn’t think twice about swinging into action.

BALC receptionist Joshua Attwood, who was also exercising at the time Larkins went into cardiac arrest, had already looked up a recent history of who had signed into the gym, so he could pass his details onto the paramedics when they arrived.

MICA Paramedic John Seater said the paramedics who attended the case, including MICA Brendan Walker and ALS Natalie Ehrenleitner, could not be more thankful for the bystanders who helped Larkins.

Seater said the bystanders’ quick thinking, effective CPR and using the AED, all contributed to a positive outcome, stating “we really commend the bystanders who quickly recognised that CPR needed to be done and immediately started effective chest compressions..

“They did a fantastic job and we (paramedics) just built on their good work.”

Ambulance Victoria Manager Emergency Co-Responder Programs Trevor Weston said that early CPR and defibrillation were key links in the ‘chain of survival’ - a process which helps save the lives of people in sudden cardiac arrest.

“The bystanders on that day certainly exemplified the first four steps in the Chain, which no doubt contributed towards Jeremy’s survival”.

Larkins had an implantable defibrillator fitted and spent more than two weeks in hospital, including four days in a coma.

Meeting up with all those involved in saving him, he commented “I was really looking forward to meeting the paramedics and the four guys that helped me before they arrived as well - I can’t thank them enough.

“Returning to the gym for the first time for the reunion and meeting the paramedics and the bystanders has really provided me with some closure from my incident.”

Jeremy said, since he fell unwell, he has had several family members sign up to do CPR courses.

“I think CPR skills are incredibly important to learn - I’m also going to refresh my skills once I am fit enough.”