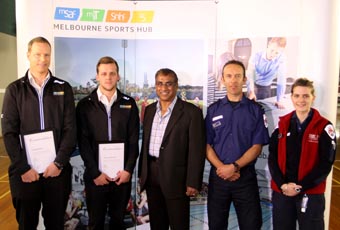 MSAC Duty Managers Stuart Daly and Nick O’Connor, who was in his second day in the role, used a public access defibrillator to shock D’Costa’s heart back into a normal function and did CPR.

D’Costa, an East Melbourne facilities manager, had played one 'full on’ game of badminton and was half way through his second when his vision became blurred and he missed the shuttlecock.

D'Costa, aged 60, explained "the guy who was my opponent asked if I was all right and I said, 'All right’ and a couple of minutes later I just passed out.

"I just remember coming back to my senses once I was being put in the ambulance."

D’Costa said he was very grateful and appreciative of the efforts of Stuart, Nick and the paramedics, adding "I felt the resuscitation that was done by the MSAC staff and the paramedics was key to my survival.

"That’s how I survived.

"If it had to happen, I couldn’t ask for a better place for it to happen at.

"As a facilities manager, I look after a number of properties and I really appreciate the need for a defibrillator at every recreation centre.

"I am (now) going to encourage all the properties that we manage to have a defibrillator."

Daly, who has worked at MSAC for more than 12 years, said it was clear to him and O’Connor that D’Costas’ condition was more serious than bystanders initially thought.

Daly explained “we’re lucky to have defibrillators on site, so we were able to give him the initial shock and then start CPR.

“After a second round of CPR, he started showing signs of life and after just a few minutes he was conscious and talking. I’ve never seen such a quick turnaround – he’s a very lucky guy.”

O’Connor, who had been a swim teacher at MSAC for more than three years, said his second day as a Duty Manager remained “a bit of a blur”.

He stated “we go through so much training to be able to do our jobs, and so on the very rare occasion when we actually need to help someone in as serious a condition as this guy, all that knowledge kicks in and we just do what we have been trained to do.”

Paramedics and firefighters arrived soon after, with the Paramedics stabilising D’Costa before taking him to the Alfred Hospital. 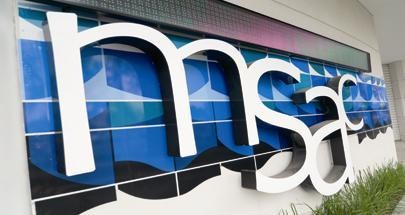 Gray explained “when we arrived Jeromias had a pulse and he was in an altered conscious state and no longer in cardiac arrest.”

Gray praised Daly and O’Connor’s efforts, saying a quick response combined with early CPR and early defibrillation were vital when someone was in cardiac arrest.

He added “it shows you the importance of having access to a defibrillator in places like sports stadiums, sporting clubs, public transport hubs and entertainment venues. They are so effective.

“Getting to the person quickly, early CPR and early defibrillation are basically the big difference between someone surviving or not surviving a cardiac arrest.”