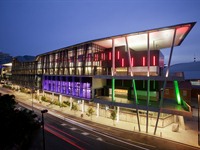 The countdown is on until the Brisbane Convention & Exhibition Centre (BCEC) welcomes the most powerful leaders of the modern world to the G20 Leaders Summit, the world’s leading business event.

Chosen as the host venue for the G20 summit on 15th and 16th November 2014, BCEC is Australia’s most-awarded convention venue. Internationally it is rated among the leading convention centres of the world.

The G20 provides a unique opportunity to showcase to the world the quality and calibre of the centre’s world-class facilities and its impeccable track record of hosting large-scale international events.

In the lead-up to the G20, the Centre has experienced one of its busiest periods on record. August and September saw it host 223 events, including 35 conventions delivering 15,000 delegates to Brisbane with an economic boost to the city of $39 million for the two-month period.

BCEC General Manager Bob O’Keeffe said there had been increased interest in the centre because of the G20 Summit and he expected that momentum to build.

O’Keeffe explains “the G20 is a catalyst to build on our already strong track record of hosting international scientific, technology and business events and heightened awareness of Brisbane and its scientific and research credentials will help attract these key sector conferences.

With the addition of its $140 million boutique expansion in 2012, the Brisbane Convention & Exhibition Centre was established as Australia’s most flexible meetings and events venue, the only convention centre in Australia with three stand-alone tiered auditoria, able to accommodate from 400 to 8,000.

During the last financial year, the Centre’s team confirmed $156 million worth of new conferences, which will result in bringing more than 70,000 delegates to Brisbane including some of the world’s leading experts in the science, medical, allied health and energy sectors.

BCEC is supported by its convention partners – Tourism Events Queensland and Brisbane Marketing – and works in close collaboration with Brisbane’s science and research communities in attracting high-calibre international scientific meetings to the city, an activity expected to increase post-G20.