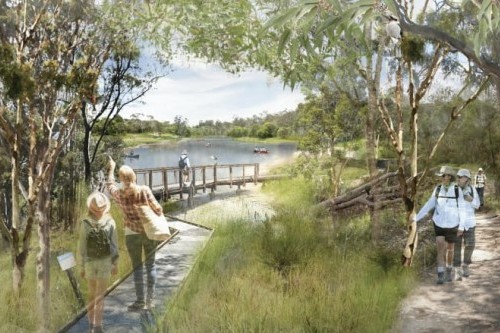 Brisbane City Council has released a draft masterplan that would see a heavily polluted creek running through the city’s south reimagined as both a sanctuary for wildlife and an “urban playground.”

The $100 million redevelopment of Oxley Creek, a 15-kilometre waterway between the Brisbane River and Larapinta includes provisions for a nature-based adventure park, bird watching facilities, a sport and recreation centre, and an extensive network of walking and canoeing trails.

The masterplan for the 20-year redevelopment has been prepared by Brisbane-based multidisciplinary design studio Lat27 for Oxley Creek Transformation, the wholly Council-owned company charged with guiding the vision for the area.

According to the masterplan, the creek water quality has long been impacted by industrial pollutants and contaminated groundwater.

Commenting on the masterplan, Brisbane Lord Mayor Graham Quirk said the Oxley Creek transformation project was the first step to revitalise the creek corridor into a 1000-hectare world-class green, lifestyle and leisure destination.

“Once complete, the Oxley Creek corridor will not only be reimagined as an urban playground and wildlife sanctuary, showcasing Brisbane’s natural environment and relaxed sub-tropical lifestyle, but it will help preserve an important green-corridor for future generations.”

Brisbane City Council first announced the project in 2016, with Lord Mayor Quirk advising that prioritising the environment was central to creating a liveable city and that the project would revitalize Brisbane’s “most urbanised waterway.”

The draft masterplan will remain open for public feedback until Sunday 27th May.

The final masterplan is due to be released by late 2018 with detailed design and implementation to follow.

Image: A concept illustration of the $100 million Oxley Creek transformation.