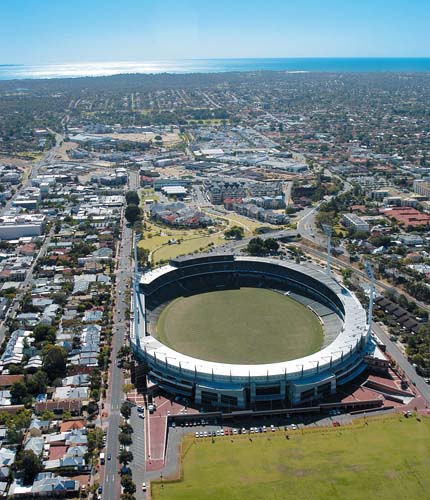 The West Australian newspaper has reported that the Western Force Super 14 rugby franchise is set to move from Subiaco Oval to the Town of Vincent's Members Equity Stadium.

The reported move, set for 2010, will almost certainly end the Western Australian Government's plan to spend $1.1 billion on a multipurpose arena at Kitchener Park.

The decision by the Super 14 rugby club will cost the WA Football Commission up to $1.9 million a year in lost rent. However, The West Australian reports that the saving will be a financial lifeline for the Force, which has seen its membership slump.

According to journalist Dave Hughes, "the Force says their only chance to reclaim lost support is to play at a rectangular stadium to improve the atmosphere. At Subiaco, most fans are more than 30 metres from the sideline while the front row at Members Equity is 6.5 metres away and corporate boxes just 15 metres away.

"The move, approved at a Force board meeting this week, will put new pressure on the Government to fulfil its 2004 promise to the Australian Rugby Union to upgrade the capacity at Members Equity to 22,000.

"It involves reconfiguring Members Equity at minimal cost to increase the capacity from 17,400 to 21,000, which is the expected average crowd at Subiaco Oval for the next Super 14 season."

The West Australian newspaper reported that Allia Chief Executive Peter Bauchop said plans included temporary seating at the northern and southern ends, transportable corporate boxes and two big screens, stating "spectators will be right on top of the action and the atmosphere will be fantastic.

"It's a boutique stadium, half the size of an AFL ground."

The newspaper also reported Force Chief Executive Greg Harris stating "after three years at Subiaco Oval, our memberships are down by a half and our attendance by a third.

"We've done a lot of research to learn why and itâs mainly because of Subiaco Oval's unsuitability for rugby (and) it's no longer viable for us to be there.

"Our match-day costs are substantially higher than (those of) the other three Super 14 sides in Australia - in the case of the Reds and the Brumbies, more than twice as much - yet we are the only team playing in a non-rectangular stadium.

"To be financially sustainable in the long term, we've got to get the fans back to games and we just aren't going to do that at Subiaco Oval."