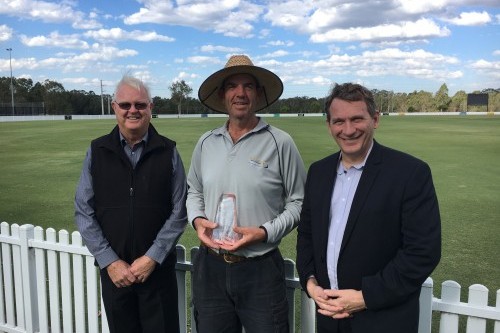 Blacktown’s Joe McAleer Oval has been named Cricket NSW 2017/18 Ground of the Year, for the second consecutive year.

The award recognises excellence by curators in the preparation and maintenance of the cricket wicket during the Sydney Grade Cricket season.

Blacktown City Mayor Stephen Bali is thrilled the team have been recognising beating out the likes of Drummoyne and North Sydney two years in a row, stating “I would like to commend the entire Blacktown Venue Management Ltd Grounds Team, particularly Sean Glasshoff, Team Leader Heath Taylor and Grounds Coordinator Matthew Cairns on their efforts in preparing a high quality playing surface. It has been praised by the club, visiting teams, umpires and Cricket NSW alike throughout the season.

“The award tops of another fantastic season of cricket in Blacktown. Council’s commitment to providing first class facilities for all levels of sport can be seen at Joe McAleer with the oval now featuring an electronic scoreboard. The high quality scoreboard was jointly funded by Blacktown City Council, Cricket NSW, Blacktown District Cricket and the NSW State Government.