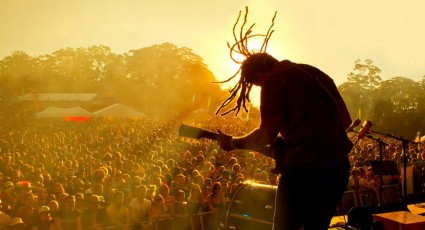 The recent Big Pineapple Music Festival on the Sunshine Coast, featuring The Jezabels, John Butler Trio and Violent Soho, appears to have shown that zoo animals and a music festival can co-exist.

With the 2014 Big Pineapple Music Festival have attracted a range of complaints from animal rights activists because of its close proximity to the Queensland Zoo, the Festival’s new location has been commended for minimising noise pollution.

With the exception of a single drunken fan who tried to gain access to the Zoo, the weekend passed without any other encounters between the 9,000 festival goers and the animalsenjoyed the third annual event without incident.

Festival co-Organiser Marcus Pluckhahn was enthusiastic about the Festival in its new location, telling the Sunshine Coast Daily “the surroundings were beautiful and there was a general vibe and feeling on site where everybody could see it was a great place to be.

"Everything ran on time and punters were co-operative and patient if they needed to be.

"The police were quite impressed with people's behaviour."

A police media spokesman said there was no record of any arrests relating to the festival.

“Even the heavy bass beats were not intrusive at the zoo entrance point. The result has made a huge difference for these captive animals."

Explaining the new location, the Festival’s organisers, news for 2015, stated on their website that “we are now roughly 1 kilometre away and on the other side of the busy highway from where the Zoo is."

The website also noted "as part of our strategy we will also have a sound technician with a sound metre that will be standing on the Big Pineapple/Zoo side of the Highway taking sound readings which will allow us to keep the sound levels within the set legal parameters that music events in QLD work within."

Bennett started a petition via change.org recently, citing a need for a 5 kilometre buffer zone between rock concerts and ‘zoo animals and baby koalas’.

Bennett went on to tell the Sunshine Coast Daily that similar precautions are made for all future music festivals.

She concluded "(the) event was totally appropriate and reasonable, so if there were guarantees from the (Sunshine Coast Regional) Council that every year this was the way the festival was going to be, that would be wonderful."