From 22nd to 26th February 2016 artistic eyes will once again be firmly fixed on Brisbane for the Australian Performing Arts Market (APAM), the leading biennial industry event for contemporary performing arts from Australia and New Zealand.

Brisbane Powerhouse Artistic Director Kris Stewart said Brisbane Powerhouse is proud to be the home for APAM 2016, which is the only industry event in Australia to provide international and national presenters, agents and influencers with access to live works by Australian and New Zealand artists across genres and cultural backgrounds, including Aboriginal and Torres Strait Islander arts.

Brisbane City Council Lord Mayor Graham Quirk said he was pleased to again welcome an influx of national and international visitors to Brisbane for APAM 2016.

Lord Mayor Quirk commented “Brisbane will play host to more than 600 national and international delegates and more than 250 artists for five days when they arrive in Brisbane in February next year to celebrate the performing arts.

“APAM 2016 will bring positive economic benefits for hotels, restaurants and other flow-on areas and will continue to build on Brisbane’s reputation as a destination for conferences, business and the arts.”

Australia Council for the Arts Chief Executive Tony Grybowski said there were a number of good news stories from APAM 2014 and he was confident many of those presenting in 2016 would achieve similar success.

Grybowski added “it was exciting to see one of our leading Aboriginal and Torres Strait Islander arts organisations Black Arm Band’s full-length work Dirtsong secure a six city tour to China in August 2014 as well as a six performance tour in Singapore and Taipei in August this year and a Canadian tour as a result of APAM 2014.” 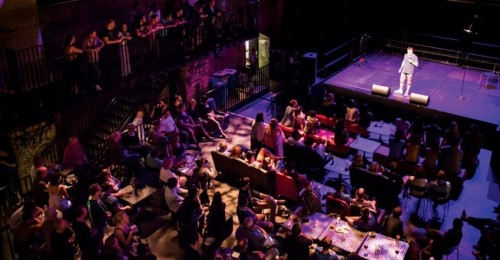 Established in 1994 by the Australia Council for the Arts, APAM showcases and promotes a thriving, diverse national performing arts sector and stimulates ongoing dialogue and exchange between Australian producers and International presenters.

It provides Australian artists and arts organisations a unique opportunity to perform live to an international and national industry audience, introduce the artistic creator and increase awareness for their company and body of work, with the ultimate aim of securing national and international tours.

Brisbane Powerhouse will be the home for APAM 2016 activities and performances, with the support of a network of local partner venues including the Queensland Performing Arts Centre (QPAC), the Judith Wright Centre of Contemporary Arts (JWCOCA), and the Queensland University of Technology Gardens Theatre (QUT).