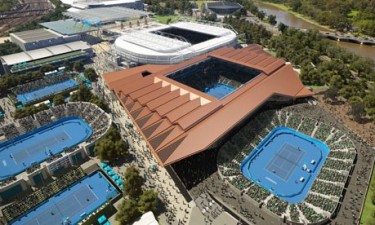 The Australian Open is now "weatherproof", and could be played entirely indoors after the installation of a third retractable roof at Melbourne Park.

The retractable roof on the Margaret Court Arena, the event's third after the Rod Laver and Hisense Arenas. will mean matches can continue even in extreme weather events, as were experienced during a heatwave in Melbourne in 2014

Tiley stated "there's no question that now having a third stadium with a retractable roof, that if we had to in the unlikely event, we'd be able to complete the tournament.

"Before it was not a possibility."

Tiley said the roof of the new Margaret Court Arena could open and close in just five minutes, making it the fastest in the world.

He added "to be able to weatherproof this court so quickly enables us to have continuous play.

"Often you see in other stadiums, you've got to stop play before you can close the roof. That's not the case here."

Operational since July, the Margaret Court Arena has been expanded from a 6,000-seat open air stadium, to a 7,300 state-of-the-art facility.

In 2014, Australian Open organisers enacted their extreme heat policy early on day four of the tournament, on the third day of 40C degree-plus temperatures.

The 2015 Australian Open begins in Melbourne on 19th January.