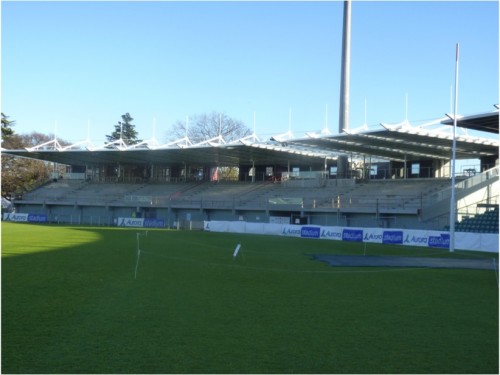 The new grandstand at Launceston's Aurora Stadium was opened yesterday, in advance of yesterday's AFL round 20 clash between Hawthorn and North Melbourne.

The redevelopment of the new Northern Stand provides 2,125 new seats increasing the overall seating capacity of the Stadium to 14,000 and total venue capacity to 21,000.

Backed by $4 million in Federal Government funding, the $9.9 million dollar project included relocating the roof of the former heritage listed Northern Grandstand to the adjacent Invermay Park - the redevelopment having been hastened after a fire destroyed three of the eight bays of the historic Northern Stand in 2008.

Launceston City Council contributed to the project with the balance coming from the Tasmanian Government and the AFL.

"I'm delighted that the Tasmanian Government has been able to provide $2 million toward the construction of this new stand, which completes works to make Aurora Stadium one of the best football venues anywhere in Australia."

The Minister added that the relocation of the old stand would also provide a boost for grassroots AFL and cricket, adding "these improved facilities will allow local clubs to expand their programs and offer a greater range of facilities, programs and recreational opportunities."