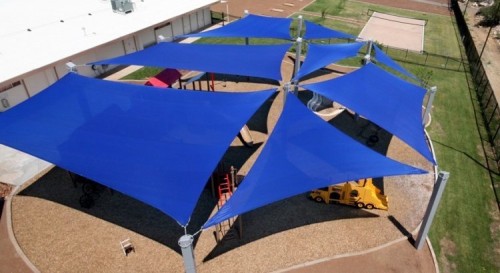 An Auckland mother's petition for more calling for councils to install shade covers at playgrounds has struck a chord with parents, achieving over 1,000 signatures in just over a day.

Foy hopes to convince Auckland Council to provide more shade for both children and parents at playgrounds around the city, and for other councils around New Zealand to follow suit.

On her petition page, Foy writes “given that New Zealand has one of the highest rates of melanoma in the world, it is unacceptable that our playgrounds are still out in broad daylight with no shade or cover.

"A lot of parents do not take their children to playgrounds because it is either too hot, there is no shade, or the equipment is scorching."

Foy said the petition was about more than just preventing skin cancer, highlighting other heat-related issues like dehydration and hot play equipment that can stop children enjoying their time in  playgrounds.

She added “it's not necessarily all about protecting them from cancer, it's more than that. It's about the heat of the sun, and the equipment," she said.

Auckand Council, which has more than 700 playgrounds across the region, said it tried to factor shade into all new playgrounds and upgrades of existing ones.

Sources of shade could include sail cloths or trees. The council also tried to limit the use of unpainted steel, which got very hot, in its playground designs.

Bowater said the best way for parents to ensure their local playgrounds were adequately shaded was to get involved in the design of new playgrounds or the upgrade of existing ones.

Bowater told FairfaxNZ “most playgrounds are in local parks, which are looked after by the respective Local Board, so ultimately the approval of playground designs rest with Local Boards.”

The Cancer Society said it supported Foy's call for more shade cover at playgrounds, with a spokesperson explaining “shade is an important component of sun protection and there are some great overseas examples of shade in playgrounds.”