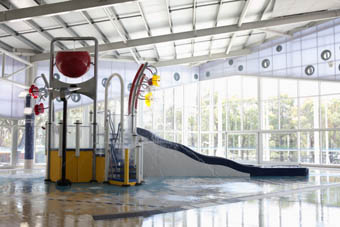 Whitehorse Mayor Councillor Andrew Munroe said Council was delighted that the new state-of-the-art aquatic and recreation facility had taken out the top gong at the awards ceremony.

Mayor Munroe stated “this award is a culmination of the great support and vision by Councillors and Council’s executive team on top of the innovative and outstanding service delivered by the organisation, management and staff on a daily basis.”

Mayor Munroe added “the $30 million plus redevelopment of Aqualink Box Hill has already exceeded expectations, with a record number of visitors frequenting the facility and a number of awards already under its belt.,”

Aqualink Box Hill reopened in December 2013 with five heated swimming spaces, including outdoor and indoor 25 metre pools, a dive pool, a family-friendly water-play area with a splash pad and large tipping bucket, as well as a spa, sauna and a warm-water pool, which can be used for injury rehabilitation.

There are more than 120 group fitness classes conducted each week at the facility, an expansive 700 metre² gymnasium, a crèche, a contemporary style café, and a modern sports stadium with three multi-sport courts for social and competitive basketball, netball, badminton, table tennis and futsal.

Aqualink Box Hill was featured in the November/December 2014 issue of Australasian Leisure Management.