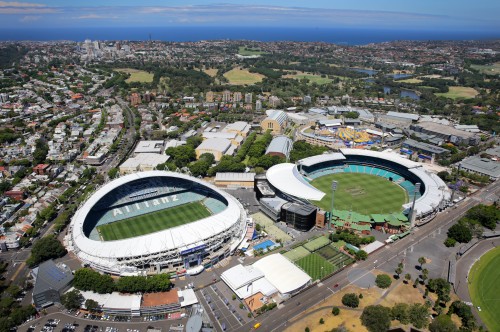 The Sydney Cricket Ground Trust’s ambitious Masterplan for the SCG and Allianz Stadium is to benefit from funding announced in the 2015/16 Budget by the NSW Government.

Among $175 million to be invested in sports and facilities around NSW over the next year, $5.8 million was set aside for supporting ongoing Master Plan works in the Moore Park precinct.

The most recent investment made by the Trust was a $20 million technology upgrade to make Allianz Stadium the most technologically advanced venue in Australia, boasting free Wi-Fi, a 1200-screen IPTV network and two giant new superscreens.

Shepherd explained “Stage II of the precinct Master Plan – the SCG’s Noble Messenger Bradman Stand – was recently named project of the year at the Stadium Business Awards in Barcelona.

“The $197.5 million project, funded jointly by the Trust and State and Federal governments, was completed on time and under budget.”

Other key projects to be funded by the greater investment and infrastructure and sporting programs includes:

• $12 million over three years to assist with the development of the Western Sydney Sport and Community Centre in Penrith, including $8 million in 2015/-16;

• $5.9 million in capital expenditure for upgrades to Sport and Recreation Centres and ex-Olympic venues;

• $5 million to assist with the development of the second circuit at Mount Panorama in Bathurst;

• $1 million additional funding for maintenance, safety and compliance works for Sport and Recreation Centres across NSW and ex-Olympic venues in Western Sydney;

• $1 million to assist with the development of the Northern Inland Centre of Excellence in Tamworth.

For more information on the SCG Trust masterplan go to www.scgt.nsw.gov.au/latest-news/masterplan/