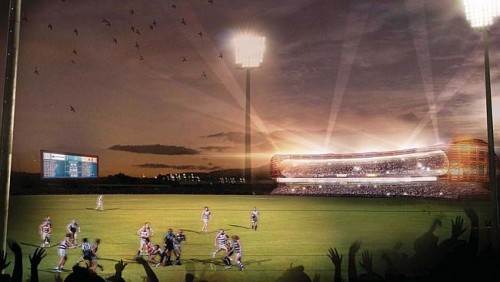 The success of recent AFL matches in Darwin has led the AFLNT to release a vision of its plans for a redeveloped TIO Stadium at Darwin’s Marrara Sporting Complex.

With Chief Minister Adam Giles advancing plans to develop the Northern Territory, AFLNT is hoping that its $80 million stadium plan gets Government backing.

“We will be presenting these designs and the ­feasibility study to the Federal and Northern Territory Governments to be considered as part of the Northern Australia Development strategy.

“This is just one concept design of how a new stadium could look. We will no doubt present more in the coming months as we explore all ­possibilities.”

Frawley and his administration have already presented their own ‘Northern Australia Strategy for AFL in the NT’ to the AFL in Melbourne.

The stadium plan includes an expanded main grandstand, portable stands on the scoreboard side of TIO Stadium, kitchen and dining facilities, new changerooms and resurfacing are just some of the upgrades.

Frawley adds “we have to be able to attract AFL games in Darwin and even a club that wants to play several home games here.”

A $50,000 feasibility study into the redevelopment will incorporate the NT Government’s Department of Sport and Recreation and form part of the funding submission.

Meanwhile, the Melbourne Football Club recently signed a new deal to play two matches per season in the Northern Territory until 2016 – one at TIO Stadium and one at Traeger Park in Alice Springs.

Image shows an artists impression of the redeveloped TIO Stadium.