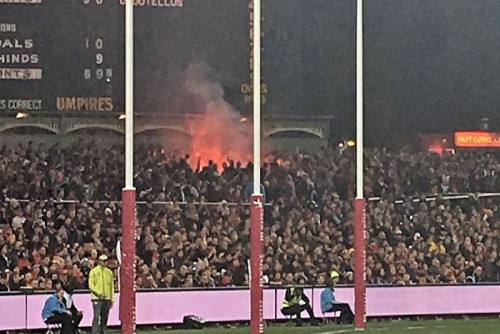 Adelaide Oval's enhanced security screening is under scrutiny after a flare was let off during last night's AFL match between the Adelaide Crows and Geelong.

A 33-year-old man has been charged by South Australian Police over the disturbance during the final quarter of the AFL Premiership and barred from returning to the venue.

Telling the ABC that bad behaviour would not be tolerated by football fans, Chandler stated "I'd like to commend the crowd for the way they handled the incident, apprehending the person until (Police) arrived.

"It's antisocial, it's dangerous and it has no place in football, or for that matter any other sport.

"We've made the decision to ban this person for all events at Adelaide Oval for life."

Adelaide Football Club condemned the incident, with Director Rod Jameson telling ABC Grandstand the club would be "all over it, really quickly".

Jameson stated “for that (flare) to be missed (by security staff) is extremely poor.

"A lot of people will be looking into it to make sure that it never happens again, and I think it was remedied very quickly - but still should have never happened."

Adelaide Oval toughened security screening earlier in the year after the Manchester Arena bombing in England.

Adelaide Football Club said it would discuss the incident with the Stadium Management Authority and South Australia Police before any further action was considered.

ABC Grandstand commentator Gerard Whateley described the incident as "extraordinarily rare", stating "I can't recall being at an AFL game where that's happened before.

"Whenever it happens in the round-ball code there's huge pressure on the club involved and on the governing body to make a stand.

"It's especially dangerous if you do see the set-up [of the standing area] where people are crowded shoulder-to-shoulder."

Flares have been associated with poor crowd behaviour at A-League matches, with Football Federation Australia taking extra steps to get rid of them from the game.

Earlier this year Crows star Eddie Betts complained being subjected to racial abuse from fans during the Crows game with Port Adelaide at the Adelaide Oval.

Image: A man has been charged after a flare was let off in the crowd at Adelaide Oval last night. Courtesy: twitter/@SkMim2