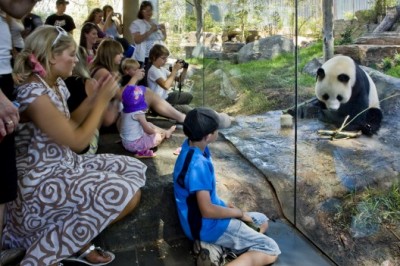 Visitor numbers to Adelaide Zoo have risen by 70% since giant pandas Wang Wang and Funi arrived a year ago.

A special anniversary for the popular pair at the end of the first year of their decade-long stay, saw the pandas showing affection for each other.

Keeper Angela Neindorf told the ABC the pandas will be put together next year, in the hope that they will breed, stating âit would be great if they do breed and we have a little panda cub, but (it will be) pretty touch and go.

"We think that probably we won't see a panda cub next year but they will be showing all the signs of breeding."

The pandas are expected to provide a $600 million boost to the South Australian economy during their 10-year stay at the Adelaide Zoo.

Meanwhile the New Zealand Government is believed to be advancing a bid to host a breeding pair of giant pandas.

For more information visit the Adelaide Zoo website at www.zoossa.com.au/adelaide-zoo