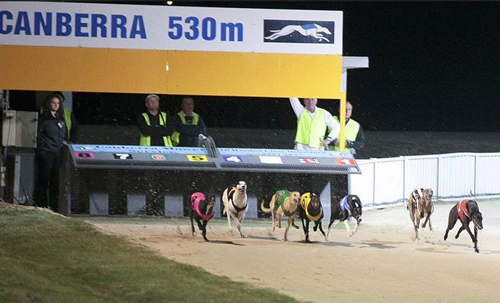 The ACT Legislative Assembly has passed a controversial bill to ban greyhound racing.

Set to be introduced from May next year, the legislation will the ACT become the first jurisdiction in Australia to prohibit the racing and training of greyhounds.

Resulting from concerns over animal welfare, the move follows the decision by the NSW Government to reverse its greyhound racing ban last year.

Data analysed by the ACT Government shows more than one third of dogs injured while racing in Canberra over a 12-month period disappeared from competitive sport.

Just five of those 28 greyhounds are listed as retired, leaving 23 dogs with an uncertain fate.

ACT Attorney-General Gordon Ramsay presented the data to the Legislative Assembly as part of the debate on the legislation to ban greyhound racing.

He advised “these statistics illustrate a very real concern that the (Canberra Greyhound Racing Club) is not living up to its public commitment to a 100% rehoming rate.”

It insists the ACT industry cannot be separated from the problems of live baiting and animal cruelty uncovered in NSW by an ABC Four Corners investigation.

Attorney-General Ramsay added “as recent as last week, Greyhound Racing NSW banned a trainer for killing a greyhound puppy by smashing it over the head with a hammer twice.

"This particular trainer has had 15 race starts at the Canberra Greyhound Racing Club."

However, the Australian Veterinary Association (AVA) has written to the ACT Government expressing concerns about its legislation with President Paula Parker concerned the bill does not have a clear link between a new code of practice for greyhound owners and the penalties for breaching it.

The AVA also wants a ban on keeping small animals near where greyhounds are kept or trained, as recommended by the Greyhound Industry Reform Panel.

Parker told the ABC “our view is that there should be no exemptions for rabbits, piglets or possums which have been used for live or dead baiting and that those provisions are enforced.

"It's incredibly important that that happens because that must be a thing of the past and that must be strictly enforced."

The Canberra Greyhound Racing Club is protesting the ban and believes the law can be reversed.

Fearing a national ban, Tutt stated “we're the thin edge of the wedge and this could be the start of greyhound racing being banned Australia-wide and in New Zealand.”