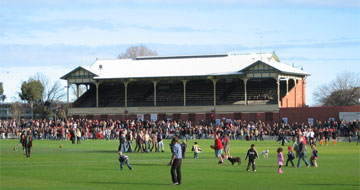 Victorian Premier John Brumby's election commitments to sport and leisure have continued with a pledge to contribute $20 million to redevelop Melbourne's Junction Oval.

The funding for the heritage-listed St Kilda ground, will enable plans to transform the venue into a world-class cricket centre to come to fruition.

Under the plan, the iconic ground will be converted into a 5,000-seat boutique stadium to host first-class domestic matches while new elite state training facilities including an indoor centre would be established.

Premier Brumby explained "from the time Test Cricket was born here in 1877 to the spectacle that is now the Boxing Day Test, Victoria has always been the heart and soul of Australian cricket.

"The Junction Oval has been a stage where cricket greats like Bill Ponsford, Jack Ryder, Lindsay Hassett, Dean Jones and one of the finest bowlers the world has ever seen - Shane Warne - honed their skills and became part of Australian folklore and identity.

"Building a new world-class State Cricket and Community Centre will cement Victoria's position as the sporting capital of Australia. Cricket Victoria has a proposal to rename the St Kilda Cricket Ground the Shane Warne Oval and I am happy to lend my support to such a proposal."

Cricket great Shane Warne, after whom the new centre may be named, congratulated the Premier on todayâs announcement, stating that the "commitment by the Premier will not only ensure Victoria will be well represented in our national team but is great news for junior and community cricketers across Victoria."

It's believed the two heritage-listed grandstands will be retained and refurbished as part of the plan while the project will also include health and wellness facilities, indoor sports centre, international standard playing surface, first-class practice wickets, scoreboard and multimedia and broadcast facilities.

Premier Brumby is also behind a bid to rename the Junction Oval after Shane Warne. The iconic spin bowler grew up playing all his cricket at the venue, with the St Kilda cricket club in the district cricket competition, behind playing with the Victorian Bushrangers and Australia.

The Junction Oval, also referred to as the St Kilda Cricket Ground, was primarily a football ground in its early years, home of three VFL clubs at different times: St Kilda, South Melbourne and Fitzroy. The Victorian Bushrangers have played several games at the venue including the 2009 Sheffield Shield Final.

The election commitments to sport and leisure made by Victorian Premier John Brumby follow a trend seen in the recent Federal Election. Read our Blog at http://ausleisure.blogspot.com/2010/08/leisure-election.html