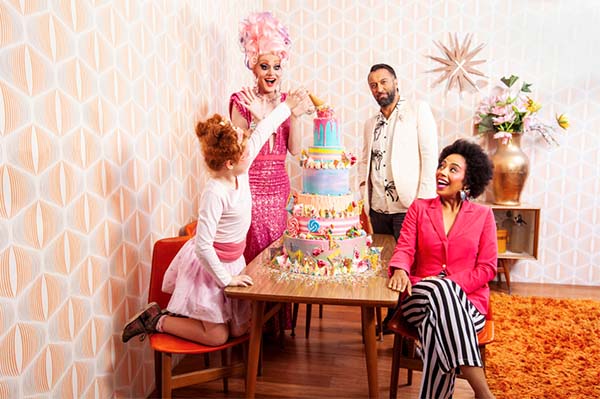 Sydney Fringe Festival, New South Wales’ largest independent arts festival, has released what is considered to be its most ambitious program. The 10th anniversary will be celebrated at The Rocks, City Tattersalls and surrounds, bringing life back to the CBD and stretching into the inner west and greater Sydney across 21 postcodes.

Sydney Fringe Chief Executive and Festival Director Kerri Glasscock comments that, “2019 is Fringe’s 10th birthday and we are celebrating with an epic program. September starts with Fringe Ignite - our dazzling opening night party in Sydney Fringe’s spiritual home, Newtown, where we began a decade ago.

“In true Fringe style the 2019 program will highlight all that Sydney’s dynamic cultural sector has to offer, returning to our roots and stretching into Western Sydney, but also looking forward to the future and painting the CBD pink.

Glasscock adds: “The Sydney Fringe Festival highlights the creative heart of our city offering an annual snapshot of how Sydney feels, where we are and where we are heading. 2018 was our most successful festival to date, and 2019 is shaping up to be bolder, braver and more ground breaking than ever before!”

Fringe will present new opportunities as well as amplify annual offerings with over 192 events across 22 inner-west venues, highlighting the precinct and filling local businesses, shopfronts and bars with live music and comedy.

The precinct will include the return of the Emerging Artist Share House with World’s Best/Worst House Party, an immersive theatre event that is part-party, part-theatre show and part-house meeting.

The Innocent Bystanders Touring Hub at the Old 505 Theatre, Newtown will expand onto two stages, with a program of award-winning performances touring from Fringe festivals around the world. It will feature 10 theatre works, hand-picked by Glasscock:

● Internationally award-winning UK-based The Flanagan Collective and Gobbledigook Theatre’ will present sister productions: modern re-tellings of the ancient myths of Orpheus and Eurydice.

● Scottish Collective 21CC present The Ballad of the Apathetic Son and His Narcissistic Mother: the story of a mother and son who create a performance inspired by their shared love for singer Sia, and her hair.

● Victorian Indigenous actress’ Sandy Greenwood presents her dynamic one woman show Matriarch, that illuminates the strength and resilience of four generations of Gumbaynggirr women from the 1940s to the present day.

● Canberra based Little Dove Theatre Art present Evangeline a hard hitting and incredibly beautiful examination of the cycle of grief.

● Australian U Mad? Productions presents Party Snake, an electrifying one-Queen-show about the raw, glamourous and raucous life of a Drag Queen.

● New Zealander and Bruce Mason Award winner, Sam Brooks presents Say Something Nice, a live art piece that will teach us how to be nice to each other.

● Direct from the UK, All I See Is You is a smash hit rollercoaster love story inspired by real accounts of queer love 50 years ago.

In 2019, for the first time, The Fringe expands to The Rocks Hub, with a program featuring 66 events across 13 spaces, with curious and playful experiences on every corner of the iconic precinct.

The Sydney premiere of the high-octane comedy staged on a vintage bus: SPEED: THE MOVIE, THE PLAY will headline a vibrant program including ten productions in unique, historic locations through the Rocks.

The Rocks Hub will also feature a free program Friday to Sunday filling the streets and laneways with shows, performances, eclectic market stalls and other hidden surprises. Highlights include an interactive temporary chalk art installation, The Rocks Square STAGE PINK featuring The Welcome Choir, Junkyard Beats and The Gramophone Man.

With 30 events across 8 spaces, the City Tatts Hub highlights include the Archie Rose Cabaret Club in the spectacularly kitsch City Tatts Omega Lounge, with a line-up including Sydney Fringe Ambassador Minnie Cooper: From Chorus Boy to Leading Lady, the return of the sell out hit Discharged! A Nursing Cabaret and Sinsational Rita & Mae. For one night only, Heaps Gay will transform the 124-year-old City Tattersalls Club with DJs and performances from the likes of Jarmaz On Marz, Charlie Villas, Meer, Gina Colada for their Heaps RSL party. City Tattersalls Club will also host the official closing party in the form of an immersive theatre event DANCE ALL NIGHT including a Kevin Bacon inspired flash mob, a Cuban club, 1920’s speakeasy and more.

For the third year running, on Saturday 14th September from dusk till late, Festival partners Kensington Street will join forces with Tortuga Studios to transform their urban oasis into a sensory and evocative world celebrating the original decadent oasis Babylon with an evening of performance, live music, food, soundscapes and projections celebrating the original decadent oasis Babylon.

Rounding off the CBD activations is an artist takeover at 477 Pitt, where Fringe will transform the historic Manse Building into Sydney’s Writer’s Hub. Across the duration of the festival four playwrights will be based onsite developing works and hosting rehearsed roundtable readings open to the public. The writers in residence include: Mary Rachel Brown, Jordan Shea, Miranda Aguilar and Karolina Ristevski.

Highlights from greater Sydney include Fringeville where, in partnership with Georges River Council, Fringe takes over Hurstville Plaza for three nights of free entertainment, a pop-up food and drink and lighting projections, and ticketed performances at the nearby Hurstville Entertainment Centre.

Each year, Sydney Fringe Festival invites artists who inspire, influence and have unique voices that rise above the crowd to represent Sydney Fringe as Ambassadors; in 2019 Fringe Ambassadors are Ayeesha Ash, Declan Kelly, Minnie Cooper and DJ Jazzy.