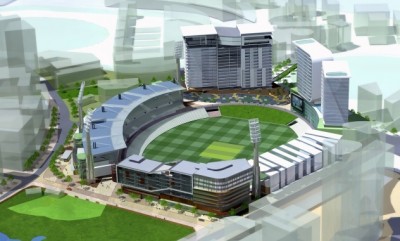 While Australia celebrated winning back the Ashes at the WACA in Perth this week, the famous ground may not be suitable for Test matches for very much longer, with the local cricket association abandoning a multi-million dollar ground development.

The $500 million redevelopment proposal, which had been that had been planned for several years, was officially shelved late on Monday by the Western Australian Cricket Association (WACA after whom the venue is named). The project had been intended to provide the venue with financial security by linking an upgrade of the ground to the construction of commercial and residential buildings on site, but disappointing pre-sales for that development has led to the scrapping of the plan.

In a statement, WACA Chairman Sam Gannon explained "despite strong sales up to November and a renewed marketing effort, we have been unable to achieve the pre-sales target required to achieve finance on acceptable terms in time to meet our commitments for the 2015 Cricket World Cup."

In September, the venue was excluded from next summer's four-match series against India and there are fears that that future Tests, and possibly limited-over matches, could be shifted away from Western Australia.

With the addition of temporary seating, the WACA can accommodate a crowd of 24,500, which Cricket Australia feels is inadequate for Tests and ODIs.

Set to open in 2018, the new 60,000 seat Perth Stadium could accommodate cricket but the Western Australian Cricket Association has yet to commit to the new venue.