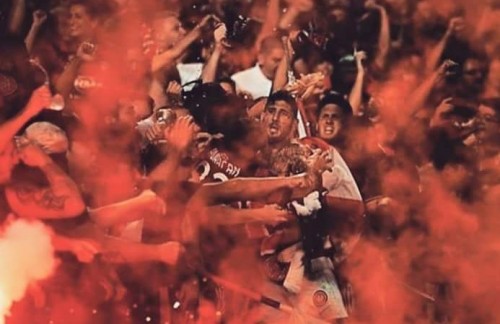 Victoria Police will be introducing an unprecedented series of measures not previously seen in any sporting code in Australia to crack-down on anti-social behaviour during the upcoming A League season.

Highlighting a desire to "promote positive crowd behaviour" and apparently backed by the Football Federation Australia (FFA), at high-risk matches Victoria Police will use sniffer dogs to search fans entering stadiums for flares and use video analysis to track known offenders and rogue supporter groups.

According to reports in News Corp Australia media, those offending are likely to be hit with bigger fines and tougher penalties, with Victoria Police more eager to pursue court prosecutions.

A dedicated police investigations team headed by a high-ranking detective formed to probe all criminal incidents at A-League matches;

The Melbourne Victory and Melbourne Heart clubs banning flags and banners of splinter supporter groups in the stands, clamping down on the association of rogue fans;

A 'Dob-a-yobbo' text messaging hotline set up for matches at AAMII Park and Etihad Stadium to encourage fans to alert police and security about troublemakers;

Stronger ticket entry regulations with members forced to scan their pass on entry and again when they reach certain parts of the ground and;

Victorian Police Commander Rick Nugent said the new measures resulted from "a total commitment ... to doing everything we can to ensure that we have violence free A-League games.

"What we're doing is collectively standing up against violence ... we're going to do whatever we can to ensure we provide a safe environment for supporters, families and kids who come along to watch sport."

FFA Head of A-League Damien de Bohun said he expected more people banned from matches with information collected by the group to be more concise and better managed, adding "we're in a much better position to identify and act on that at matches and you will find that will become a much bigger focus this season and beyond.

"We will know exactly who is in which part of the ground throughout without any question."

If successful, the Victorian model will apparently become a national action plan for controlling football crowds.

The FFA and Victoria Police have also partnered under the Go4Zero banner to add a community voice to efforts to reduce violence and encourage individuals to take action to prevent violence.

The initiative provides support to those who may be threatened with violence or intimidation providing a resource of information and ideas on how to reduce violence in the community.

The 2013/14 A-League season kicks off on Friday night with a crowd of up to 50,000 expected for the Melbourne derby between Victory and Heart at Etihad Stadium.