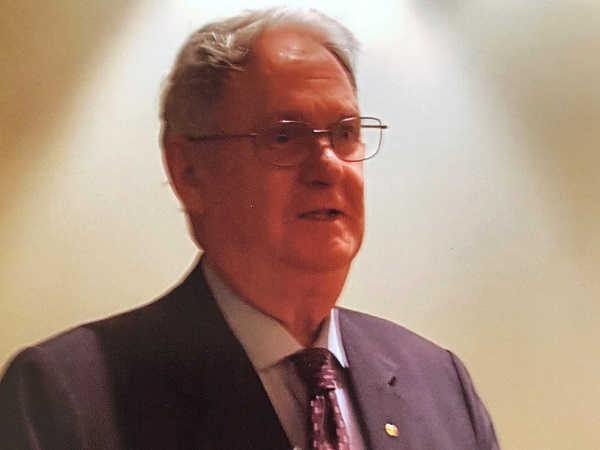 Australasian Leisure Management is saddened to learn of the death of Bob Romanes OAM, who died on Thursday (18th November) at the age of 86.

Trained as a teacher at Ballarat teachers college in the early 1950s, Bob's first assignment was at the A1 Mine Settlement School, near Woods Point, 180 kilometres east of Melbourne.

Single-handed, he taught 22 students from grades one to seven in a weatherboard hut.

Later, he worked in public schools and lectured police trainees for a number of years, then left the public system and taught at Carey Grammar before moving to the YMCA, where he started as a training officer, working his way up to the National Executive Director role over his 23-year career with the organisation.

Following his retirement he remained engaged with the industry he called 'recreation' as a consultant and lecturer.

He remained a Life Member of the YMCA.

He is survived by his wife Pam and daughter Jenny, plus four grandchildren and three stepchildren.

Click here for more information on the streaming of the service.

Click here to read an account of the first years of Bob’s working life as a teacher.

We are aiming to expand this article and welcome contributions from those with memories of this wonderful man.

In 2010, for the 100th edition of the printed Australasian Leisure Management magazine, he contributed the following feature.

Foundation for the future

In this 100th edition of Australasian Leisure Management, it is an appropriate time to reflect on the major changes which have occurred in the fitness, recreation, sport and related sectors over the last two decades.

Probably the one single event which has had the most profound effect on our industry has been the work in the development of the National Accredited Training system. This was achieved by a group of committed industry, union and government leaders who came together, put aside their differences and egos and took a risk that together they might be able to create a legacy for our industry.

The risk and foray into this system paid off by raising the profile of the industry, lifting the professional standards for staff and volunteers alike and proving that the industry could work together to achieve common goals. The upside for the many young people and others entering the system was access to nationally recognised training pathways and funding that for so long had been the province of other larger more established industries.

It is important to note that $42 million has been allocated by Federal and State Governments to the sport and recreation industry for the development of the packages and the provision of funds for training since the Industry Training Advisory Boards (ITAB) for this industry was formed.

This process commenced in 1994 when a group of people involved in the industry approached then Federal Minister for Education, Employment and Training Simon Crean MP. These representatives requested that our industry be asked to form an Industry Training Advisory Board in order to develop training packages for the industry. Minister Crean’s immediate reaction was “you are not an Industry, just a large group of, mainly volunteers, running programs for people in their spare time”.

We went away and obtained figures from the ABS which showed that some 180,100 people were employed in the Sport and Recreation Industry (85,965 full time) and (94,135 part time) compared with Mining industry of 101,500 employees which had been allocated two ITABs - one for black coal and the other for brown coal!

This was supported by the then equivalent of the current Office of Sport, led by Bill Rowe, which provided seed funding.

As a result of our second visit to Minister Crean’s office we were allocated money and permission to form the Recreation Industry Training Advisory Board (RITAB) - the 39th federally funded ITAB and the last one to be formed.

Leanne Evans was soon appointed as the first Chief Executive of the RITAB and representatives from the various industry sectors, defined as community recreation, fitness, outdoor recreation, racing and sport met to start the work of developing competency standards, with financial assistance from the Australian Sports Commission and the Department for Vocational Education and Training. Further down the track much work was put into developing a common underpinning curriculum and five sector training packages.

However, the five sectors were soon reduced to four when racing withdrew in 1996 - to eventually join the Agriculture ITAB.

As industry consultations advanced it became very clear that accreditation systems, which to a large degree provided substantial funding to the Peak Bodies representing fitness instructors, outdoor recreation guides and sports coaches and officials, were under threat if these groups were drawn into the new National Accredited Training System which was going to allow other Registered Training Organisations (RTOs) to provide training for the sector.

It took until 1999 for the then Chief Executive of the RITAB, Tony Guihot, to be able to convince all sectors to become part of the new system.

The first two registered training packages came into being in mid-1999, for Sport and Outdoor Recreation.

These packages were completed for three major reasons. Firstly, the sectors realised that Federal and State Government money was available to pay for the training; secondly, the RTOs which would be undertaking the training under the new scheme would need to pay instructors from the various sectors with the appropriate sector experience; and finally, the accreditation provided under this scheme was recognised in United Kingdom, New Zealand and South Africa.

This had been achieved by developing packages which had some generic units, such as OH&S and customer service, but allowed sectors to have their own specific sector units such as coaching units or fitness units to make up a Certificate level qualification with a sector name attached to the certificate - for example a ‘Certificate 111 Sport and Recreation (Coaching).’

Subsequently, these packages have been revised on several occasions.

One of the other factors which very much assisted the process of support for the training packages was the side by side development of the Recreation Industry Training Company (RITC).

Rudi Schneider was the inaugural Chief Executive of the RITC, whose role was to provide advice and funding for groups wanting to start trainees under the training package scheme.

One of the successes of the RITC was its ability to access government funding for some major traineeship projects. These included national projects that placed 350 trainees in the fitness industry and 1,000 trainees employed by the YMCAs.

By 1995, the realisation that the various sectors could work together to achieve a unified force for the industry through the ITAB model spurred the industry to take the next logical step and approach the Federal Government for some initial funding to form a Peak Body for the industry.

The body was granted $10,000 to assist with the initial formation work (again from the Office of Sport) and was incorporated in January 1996. It then began the work of meeting as a formal peak body called the Recreation Industry Council of Australia (RICA) in April 1996.

As a recognition of the excellent co-operation which had been shown by all parties, the Federal Government provide a further $50,000 as a ‘one-off’ establishment grant in June 1996.

The establishment of these three bodies: RITAB, RITC and RICA signalled a new era of co-operation in our industry in the later part of the 1990s. Sadly, changes in leadership of some sectors and government policies since that time have seen the demise of both RICA and RITC and a considerable change in the operation and membership of the industry training advisory board. The functions of the RITAB still survive and were absorbed into progressively larger and larger ITABs and today sit under the Service Skills Council.

There is no doubt that the development of the training packages and all that followed lifted the recognition of the industry and set the foundations for a much more professional and better trained workforce. Maybe, some 20 years later, it’s time to reflect and revisit the possibility of a united voice for the industry to fight for better outcomes for all, just like other more established industries do as a matter of course!

All that it will take is another group of pioneers to come together, put aside their differences and egos and take a leap of faith. The dividends are there for the taking.

He acknowledges the input of Leanne Evans, Tony Guihot and Rudi Schneider in compiling this feature.