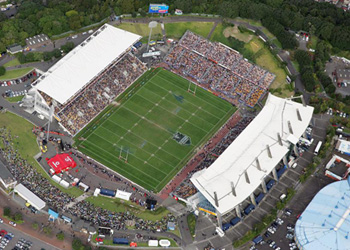 The Auckland Warriors NRL franchise is being urged to relocate from their longstanding home at Mount Smart Stadium to the QBE Stadium on Auckland's North Shore.

With their lease set to expire in 2018 and with the ageing Mt Smart Stadium facing a $70 million redevelopment bill, Regional Facilities Auckland (RFA) is urging the club to relocate to the former North Harbour Stadium in Albany.

The relocation would also fit with a $30 million RFA initiative for a sweeping reform of Auckland's sporting stadiums.

However, the Warriors are adamant that they want to stay at their home of 20-years with Club Chairman Bill Wavish insisting that it will continue playing games at Mt Smart Stadium.

The spending - which has been approved by Auckland Council and now needs only to pass through a public consultation phase early next year to become a reality - also includes $12 million for a boutique international cricket ground/concert venue at Western Springs and $5 million to assist speedway promoters to relocate from Western Springs to Mt Smart.

The plan sees the QBE Stadium becoming Auckland’s primary venue for rugby league, football and rugby matches likely to attract fewer than 25,000 spectators, with Eden Park to remain the venue for bigger events.

QBE Stadium is to undergo a $12 million upgrade that will see a roof installed over the western stand and the ground's capacity increased to 30,600. A retractable roof that would enclose the stadium could then be added when funding is available.

Explaining how the proposal is moving forward, RFA Chief Executive Robert Domm told the New Zealand Herald “(the Council has) given us the green light to start drilling down into the detail and start negotiating with people.

"There are a whole bunch of variables here that have to fit into place but, with the exception of the Warriors at this point in time, everyone else is on board."

However, Wavish told the Weekend Herald "I don't place much credence in what Robert Domm has to say."

Opponents of the plan stress that Mt Smart Stadium is Auckland’s best venue for rugby league with its stands close to game action.

They also cite the small crowds that attended the Warriors opening game of the just completed NRL season at Eden Park.

RFA’s fundamental argument is that Auckland has too many stadia and that ratepayers shouldn't have to cover the costs for three rugby stadiums when the city only needs two.

The Warriors would have access to better facilities in Albany with the Millennium Institute of Sport located close to the ground.

Auckland Council's decision to kick the Warriors out of Mt Smart Stadium has been described as a "declaration of war", by the club's ‘number one fan’ Sir Peter Leitch.

Sir Peter told the Weekend Herald “(this is) absolute bullshit. The Council are in for fight. We'll be rallying our troops.

"Why don't they just leave us alone, spend a few bob and get (Mt Smart) up to a bit better standard. I tell you now the fans will not be happy."

On a brighter note, Mt Smart Stadium will showcase rugby league’s brightest young hopes in a one-off international between the Junior Kiwis and the Junior Kangaroos this Saturday (18th October).

The Trans-Tasman clash is the main event of a doubleheader preceded by the Pirtek NZRL National Premiership grand final between the Akarana Falcons and the Counties-Manukau Stingrays.