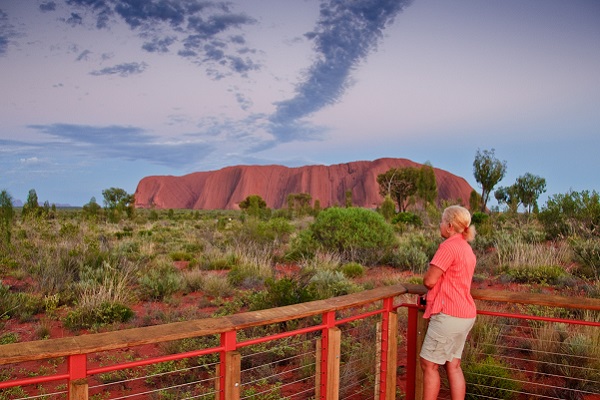 Talinguru Nyakunytjaku means 'place to look from the sand dune' in Pitjantjatjara, a traditional Aboriginal language of the area.

Speaking at the opening, Minister Garrett stated "this viewing area is the largest infrastructure investment ever in Uluru-Kata Tjuta National Park and the first major upgrade since the Cultural Centre was built in 1995.

"Construction included 11 kilometres of road to open up this new part of the park - no mean feat in this remote area.

"Talinguru also includes 1600 metres of walking tracks, a carpark, traditional shade shelters or wiltjas, interpretation of the Aboriginal landscape and stories, toilet amenities and an area that can potentially be used for outdoor performances or concerts.

"The viewing platforms landscaped into the dunes offer panoramic views over the desert oaks to both Uluru and Kata Tjuta - spectacular at sunrise but fantastic throughout the day.

"I see this as the springboard for a whole range of new visitor experiences, opening up new opportunities for Indigenous and tourism businesses."

Minister Garrett said the traditional owners chose the site and were closely involved in every stage of the development, adding "Uluru is globally recognised as a symbol of Australia and it is a major drawcard for international tourists.

"More than 300,000 visitors come here every year, contributing an estimated $400 million to the Australian economy.

"The traditional owners want these visitors to come here, to feel the spirit of the country, to enjoy the wonderful landscapes and to learn more about them and their culture.

Member for Lingiari, Warren Snowdon, added "this world-class facility they have worked so hard on is befitting a World Heritage Area. It is a great centrepiece for the work we're doing building tourism interest in the Red Centre National Landscape and shows the goodwill of the traditional owners to share their country with the world."