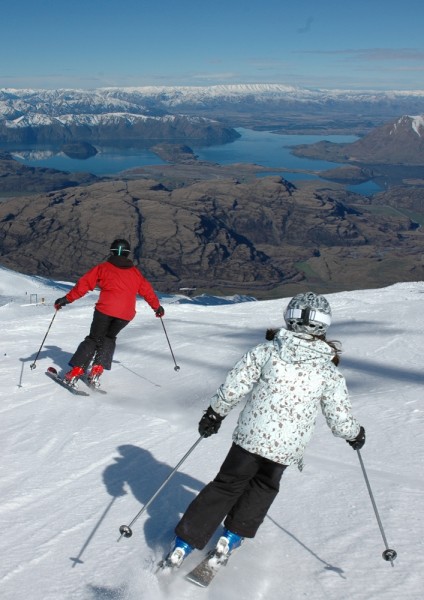 A first for Treble Cone is the Jazz Fun Park which will be located at the bottom of the Bullet ski trail in the Saddle Basin and will host entry level features aimed at children four to 13 years. Due to the versatility of the features they can also be used in other areas of the mountain for competitions and coaching purposes.

Over the summer extensive earthworks have taken place at the top of Easy Rider, removing one switchback and re-routing a small section of the upper part, to make the run wider and less steep. This will help learners' progression from the beginners' slopes to the six-seater and also define the entrance to the Saddle track.

The new trail map better reflects Treble Cone's vast and varied terrain. The run grading is now inline with international standards of green, blue, red and black to give more differentiation. The only trails marked on the map are where grooming regularly takes place, the expansive areas of off piste terrain are outlined and named. The new maps will also include the popular and challenging Motutapu Basin.

Following the successful introduction of a computerised ticketing system in 2011, the system has now been expanded to other services that Treble Cone offers. New for 2012 the TCPass can be used in the cafe, for rentals and childcare payments. Customers can load their Season or Day Pass up with dollars to spend with an easy swipe of a card.

Treble Cone Ski Area Manager Jackie van der Voort "Treble Cone is committed to providing the best facilities and services for our customers and to ensure snow enthusiasts of all abilities get the most out of their day on the mountain whether they are riding the powder in the chutes, learning new tricks in the Jazz Fun Park or taking in the spectacular view from the cafe."

Further infrastructure and service improvements include: new portaloos installed in the Saddle Basin and improving the Mainstreet approach to the automated gates at the bottom of the Six Seater.

Treble Cone early bird season passes are on sale now until 31st March 2012 through the website or by visiting the downtown Wanaka office on Dungarvon Street.

Treble Cone will open on 28th June with a scheduled closing day of 30th September.

For more information go to www.treblecone.com