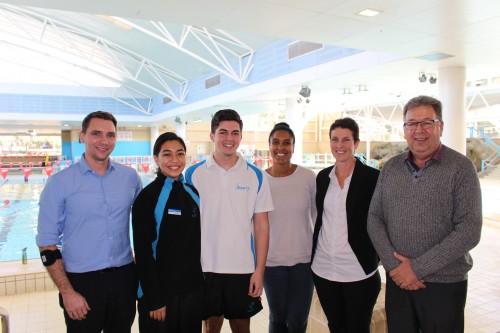 Four young professionals who developed an online dashboard to make it easy for aquatic centre managers to track key facility operations and incident data have been crowned the winners of the inaugural ARI Mentor Program.

The team, from facility management company BlueFit, was announced as the winner by Mike Henton, Chief Executive of Jonas Leisure, during a Presentation Dinner at the recent ARI Conference and Trade Show in Terrigal on the NSW Central Coast.

Jonas Leisure is the principal sponsor of the ARI Mentor Program, which saw seven teams compete over the course of six months to develop and present a data-driven solution that would provide benefit to the aquatics industry.

BlueFit team member Otua McHardy said her team came up with the idea for SALT after surveying 27 centre managers and discovering that nearly all of them had to capture the data but most still did so on paper forms.

The survey feedback suggested completing the forms and reporting on the numbers took each manager 156 hours a year, on average, which would equate to more than $20,000 in wages for facilities with multiple staff managing different business areas, she said.

McHardy explained “we wanted to create something better. We surveyed them again after they had used the new dashboard and they were down to about 96 hours for planning and reporting data.”

McHardy said she and teammates Roland Karoliny, Chris McAdam and Jemma Malik were pleased with the results and thrilled their project had been announced as the winner.

Henton said the BlueFit team’s project was an elegant solution to aquatics reporting, commenting “collating operations and incident data has been a pain-point for aquatics managers for years and the fact the BlueFit team researched and executed a solution so well in such a short time shows an extremely high degree of talent.”

Henton feels that supporting the ARI Mentor Program aligns closely with Jonas Leisure’s commitment to growing the leisure industry and nurturing its next generation of leaders.

The other ARI Mentor Program finalists who presented their projects at the ARI Conference and Trade Show were Sydney Gymnastics and Aquatic Centre and Belgravia Leisure.

The Sydney Gymnastics and Aquatics Centre project involved using the findings of a survey to develop tailored programs and staff training to increase aquatic program participation among people with disabilities. The survey explored the reasons why some school students with disabilities did not attend aquatics programs and identified ways the barriers that were identified could be overcome.

Belgravia Leisure’s project, dubbed ‘The Great Escape’, involved researching the reasons behind the increase in cancelled bookings at aquatic centres and gyms during winter, and identifying steps that could keep members engaged and reduce cancellation numbers.

The ARI Mentor Program was launched last year with the aim of providing tangible benefits to the sector through retention of talent, improved knowledge transfer and greater collaboration across the industry.

Program Project Manager Matt Griffiths, from Royal Life Saving NSW was delighted with the success of the program’s first intake, concluding “the program provides a valuable opportunity for mentees to develop technical, project and leadership skills while working on a project that provides a positive outcome for the industry.

“Each team was matched with an experienced mentor from within the industry, and we are thankful for the vital role mentors had in making the program a success.”

Professionals wishing to take part in the 2018/19 program are invited to email ARI Executive Officer Louise Magee. More information is available on the ARI Mentor Program page of the ARI website.