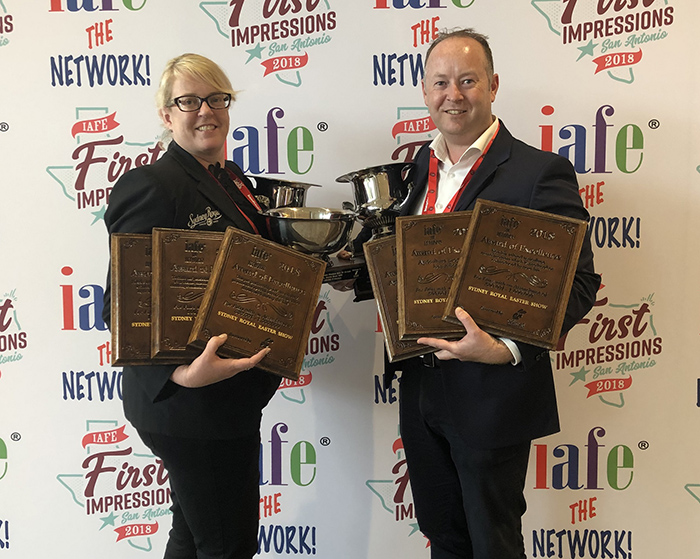 The IAFE recognises U.S and International State Fairs and Agricultural Shows for their contribution to education in the agriculture sector.

Claiming 12 awards overall at the IAFE Expo, seven of which were first place, the RAS also took home the Sweepstakes Award for winning the most points in its division, while the Sydney Royal Easter Show won the Judges Choice Award and Agricultural Division trophies for its innovative technological exhibit, ‘Farm of The Future’.

In 2018, the Royal Agricultural Society of NSW dedicated an entire pavilion to the future of farming.

The ‘Farm of the Future’ had everything from drone demonstrations to interactive soil testing and uncovered numerous ‘bots‘- computer-assisted robots designed to do many of the tasks farmers have done manually.

It truly was a snapshot of the future of farming.

David Lamb, McClymont Distinguished Professor, Precision Agriculture Research Group at the University of New England, Armidale travelled to Sydney with a group of students and volunteers in order to showcase some of the newest advances in farming technology.

One of the most successful innovations on display was one that weighs and sorts livestock. “We’ve got what we call an auto draft walk over weigh system, so that means that a single person and say, a dog, can handle their entire sheep yard operation”, Professor Lamb said.

Judged on Theme, Promotion of Agriculture, Goals and Achievements, Fairgoer Reaction, Originality and Overall Achievement, the RAS is honoured to be recognised for its programs and agricultural event, the Sydney Royal Easter Show, Australia’s largest annual ticketed event.

“The RAS is thrilled to be awarded and recognised for our contribution to Agriculture,” said Wilton.

“Our team works tirelessly to promote the importance of agriculture to the everyday lives of Australians, always working to keep the messages contemporary.

“We have recently implemented some great innovative programs such as ‘Farm of The Future’ and ‘AgVision’ which have both been recognised as front-runners in agricultural education, crucially for our young Showgoers, many of whom have never stepped foot on a farm,” Wilton added.

AgVision is an education program which aims to support agriculture and agribusiness through expos and workshops and was awarded first place for a non-fair related event or program which promotes agriculture.

Innovative agricultural technology exhibit, Farm of the Future was a partnership with the University of New England, giving Sydney Royal Easter Show guests a glimpse into the future of agriculture.

The activation was awarded first place for “best newly established program”, edging out 467 entries to be awarded the prestigious “Judges Choice” and “Agricultural Division” trophies.