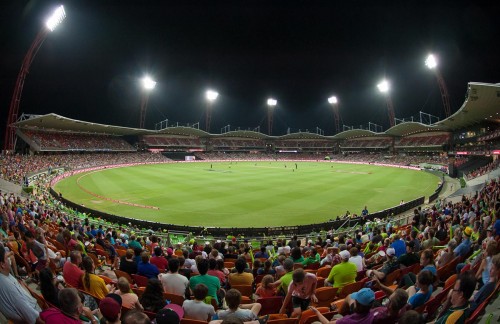 Sydney Showground has announce that Cricket Australia and the Royal Agricultural Society of NSW (RAS) have signed a 10 year agreement to host all of Sydney Thunder Big Bash League games at Spotless Stadium.

The new stadium agreement will see the Thunder play its Twenty20 cricket competition at the Stadium until the 2024/25 summer.

Sydney Showground General Manger, Peter Thorpe, stated "we’re over the moon that Spotless Stadium has been chosen as home to Sydney Thunder for the next 10 years.

"As we’ve found with AFL it’s an incredibly family friendly venue with a unique intimate atmosphere creating a great sporting experience for all.

“With both Sydney Thunder and GWS Giants now calling Spotless Stadium home sports fans can access some of the country’s most loved and sought after on field action all year round right here in the geographical heart of Sydney.”

The Stadium has three seating levels in the grandstand, with a seated capacity of 25,000 people or a concert capacity of 45,000.

Thunder played two games at Spotless Stadium in BBL04 after previously being based at ANZ Stadium since the launch of the KFC T20 Big Bash League in 2011.

“They played a very big role in establishing the club and have been a terrific organisation to deal with. We are currently in negotiations with regards to securing pitches.

“They’ve set the bench mark for how a stadium management organisation should function. "And while we’ll be sorry to say goodbye to them we are looking forward to working with the team at Royal Agricultural Society.”

Thunder have also confirmed that Michael Hussey will continue to captain the side in BBL05 after extending his contract with the club.