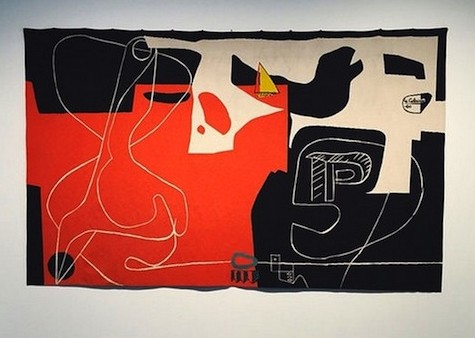 A tapestry commissioned by Sydney Opera House architect Jørn Utzon has gone on display at his landmark structure almost 60 years after it was commissioned.

The Opera House this week unveiled a 1960 tapestry by French-Swiss artist and architect Le Corbusier, a work specifically created for the venue, but which was never installed.

Utzon originally intended that the tapestry, Les Dés Sont Jetés (The Dice Are Cast), would feature as part of the fabric of the landmark structure. However, Utzon returned to his native Denmark after abandoning his architectural commission in 1966 as a result of internal wrangling, and the tapestry, which was woven in France, never made its way to Sydney.

Utzon never returned to Australia to see his completed design and was absent the Opera House’s official opening in 1973.

The tapesty remained in Utzon’s possession, hanging a wall of his home studio until his death in 2008 -and finally emerging for public view at Copenhagen’s Bruun Rasmussen Auctioneers last June, the undisputed jewel in a collection of items from Utzon’s estate.

Philanthropist Peter Weiss backed the purchase of the Utzon/Le Corbusier tapestry and contributed the largest share of its $400,000 price tag money, but funds also came from other philanthropists, Opera House staff and the NSW Government. 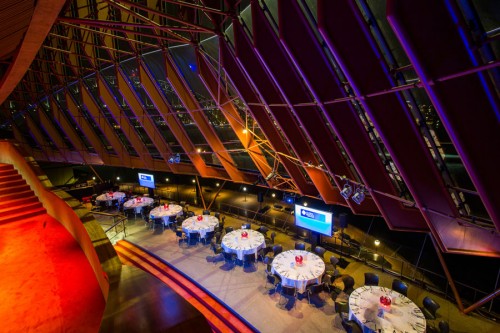 At the time of the commission, Utzon was a bold, young Danish architect whereas Le Corbusier was an internationally famous modernist who was coming to the end of his career.

Herron told the ABC "apparently the reason the tapestry is called Les Des Sont Jetes (The Dice Are Cast) is because when Le Corbusier saw Mr Utzon's design he thought 'this is the future of architecture'.

"(Le Corbusier) was so inspired by what he saw that he decided he would collaborate (with Utzon), which is not something he usually did."

Hanging in an interior designed by Utzon, Herron added “it injects the Utzon DNA back into the building - as you know Utzon left before the Opera House was complete ... (but) this is an original Utzon intention to have this tapestry at the Opera House."