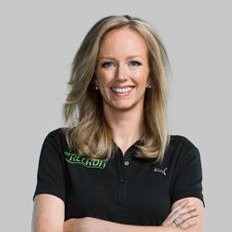 Swimming Australia has announced the appointment of author and experienced sport executive, Leigh Russell as its new Chief Executive.

With a proven track record working across participation and high performance, Russell was the outstanding candidate in the extremely competitive field that Swimming Australia considered in making the appointment.

“The breadth and depth of her experience with national and state sporting organisations, government stakeholders, elite sporting teams and growing the participation bases of sports will no doubt inspire our swimming community and drive the next level of our development.

“She is a highly impressive talent known for her collaborative leadership style and for building high performance culture.”

Russell (pictured) is the former Chief Executive of Netball Victoria and the Melbourne Vixens, General Manager - People and Culture at Essendon Football Club, General Manager - Leadership & Development at the Gold Coast Football Club and has worked extensively with athletes and as a consultant across many major Australian sports, the not for profit community and in the corporate environment.

She is an experienced Director and holds qualifications in the arts, business, psychology, and governance.

Reflecting on her appointment, Russell advised “I am honoured to have been selected to lead a truly iconic sport that holds a special place in the hearts and minds of Australians.

“Swimming is genuinely a sport for everybody - of all ages and stages. It plays an important role in keeping Australians healthy & socially connected, alongside providing amazing opportunities for athletes to compete on the international stage. Swimming serves to inspire all of us and community participation is the cornerstone of this thriving sport.

“I’m excited to bring my understanding of sport, from the grassroots to elite, and my expertise in sports leadership to Swimming Australia.

“I really look forward to working with our passionate swimming community to take the sport into the future. It’s also an incredible privilege to work with Alex Baumann and Jacco Verhaeren to help achieve outstanding success in the pool towards Tokyo and beyond,” Russell said.

Russell, who will commence in her role as of 16th April 2018, will continue Swimming Australia’s focus on expanding the reach and impact of the sport across the nation, and further commercialise the sport to ensure swimming is well positioned to meet future challenges and opportunities.

Bertrand added “as interim CEO and Chief Commercial Officer, Chris has provided and will continue to provide Swimming Australia with unwavering leadership and stability over this period of transition – particularly in a peak period over the Commonwealth Games.

“We thank Chris for stepping into the CEO role and leading the team over this time.”