HG Sports Turf are market leaders in the design and construction of premium sports fields across Australia, New Zealand and Asia.

The Sydney Olympics in 2000, 2006 Commonwealth Games in Melbourne, 2006 Asian Games in Qatar, 2003 and 2011 Rugby World Cups have all been showcased on HG Sports Turf. In 2015, this list will grow to include the ICC Cricket World Cup and the Asian Cup.

Since the close of the winter season for Australia's football codes, HG Sports Turf has been through an extraordinarily busy period, installing new surfaces at ANZ Stadium in Sydney, Newcastle's Hunter Stadium (pictured below) and the MCG. 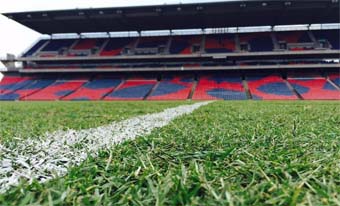 Natural Turf - HG Sports Turf offer a full range of natural turf varieties both through our sister company HG Turf in Victoria, and further afield through our affiliations with quality turf farms across Australasia.

XtraGrass™ - This unique hybrid turf system marries the advantages of natural turf with the strength of synthetic turf. Principally required for intensively used sports fields, or in high use areas on other sports.

Eclipse® - Our patented Eclipse® Stabilised Turf has become the system of choice for many of the region’s leading stadiums including AMI, ANZ, Canberra, Eden Park, Etihad, Gabba, NIB and Waikato.

HG Sports Turf are also agents for the Desso GrassMaster 'hyrbid' sports turf system used at major venues (including Dunedin's Forsyth Barr Stadium) and for major events around the world.