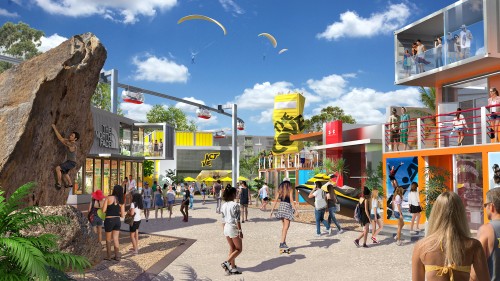 The approval covers stage one of the attraction will include the focal waterpark, The Cove main hub area and The Great Lawn multi-purpose area.

Developers Sanad Capital have flagged a further three stages at the Steve Irwin Way site, including a hotel, to be built after stage one.

Phase 1, will be built over 14 hectares and will consist of a state-of-the-art waterpark, a great lawn for major events, concerts and community activities, an outdoor adventure park with activities including kayaking, bungy jumping, net climbing, flyboarding, segways and electric skateboard hire, zorbing, stand-up paddle boarding and football to name a few. Phase 1 also includes a 6,000 metre² retail zone set to attract leading global brands and a superb choice of restaurants.

Welcoming the approval, Sanad Capital Chief Executive Bradley P Sutherland, stated “we are very excited about receiving DA approval for the first phase of our project.

“We expect to break ground over the next few months and look forward to bringing this development into reality.”

“This project, along with other long term investments such as our new airport, will elevate the Sunshine Coast’s ability to attract leisure travellers, groups and conferences, and will open the way for growth, jobs and further tourism investment on the Sunshine Coast.” 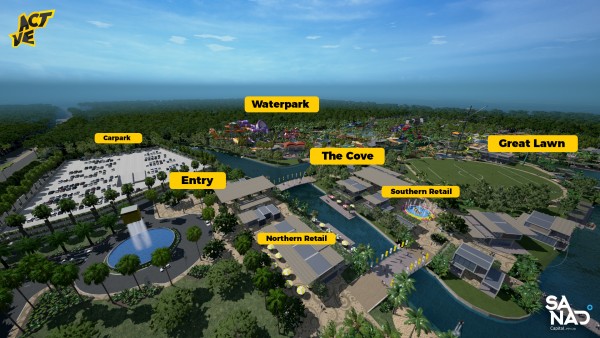 Phases two and three of the project will be submitted to Council in 2017, and these include a 4 star, 225 room family hotel with conferencing facilities, an action sports precinct with world class facilities for skateboarding, BMX, parkour and more, and the much anticipated ‘Wave Reservoir’, another first for Australia and the Sunshine Coast.

Sanad Capital announced the project after purchasing the 25 hectare plot on Steve Irwin way back in January 2016. And after collaborations with leading global companies such as Whitewater (responsible for the Asia’s largest projects including China’s Yinji Xinmi water park, WaterBom Bali, Vana Nava in Thailand, the Atlantis Resort and Wild Wadi Water Park in Dubai), Thinkwell from the United States, consultants EY (Ernst & Young) and others, phase one of the development was submitted for Council approval in October 2016.

According to the Sunshine Coast Daily, Council officers said the development must implement the use of solar power or other non-polluting, renewable energy sources, to supply part or all of the park's energy needs.