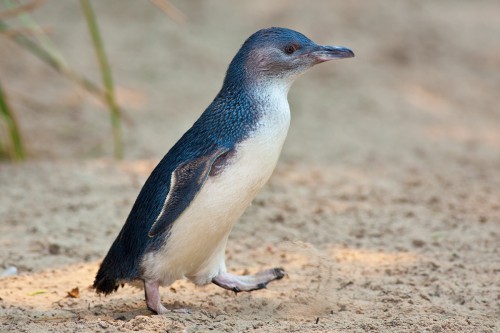 Three men who allegedly stole a penguin from Gold Coast theme park Sea World were arrested having boasted about their exploit on Facebook.

Sea World's Trevor Long told ABC Radio that Dirk the fairy penguin was recovering at the park having been stolen and released in the Broadwater on Saturday night.

Staff were relieved to have an exhausted Dirk back, as was his penguin partner, Peaches.

Long explained that Dirk had no chance of surviving alone in the wild, telling ABC Radio "it's totally foreign to this animal and it's very, very cruel. He wouldn't have survived in the wild, not at all.

"He would have been an ideal target for a bull shark ... or dogs and cats."

Dirk was found by walkers who saw him being chased out of the water by something - possibly a dolphin or a shark - and then being chased back in by a dog.

Dirk was recovered hiding under the concrete of Southport pier by Sea World staff on Sunday night. Long advised that he was very afraid and distressed when rescued.

Long said it was the first incidence of animal theft from Sea World, and was brought to the attention of police because the men allegedly revealed their crime on Facebook.

Three men aged 18, 20 and 21, will appear in court next month charged with trespassing, and stealing and unlawfully keeping a protected animal, an offence under the Nature Conservation Act.